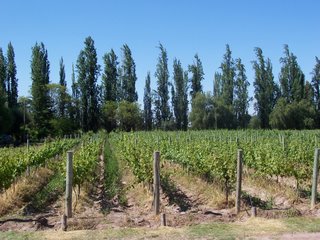 Wine Country! I'm making progress toward Bolivia, though still have some places I'd like to check out in Argentina first. Current stop - Mendoza.

MENDOZA. IT'S A tiny city, about 130,000 people. I arrived after an unleasant 19 hour bus journey from Bariloche. Sat next to a fat and slightly sweaty man the whole way. He was perfectly friendly, offering me biscuits and other nick-knacks, but this doesn't get around the fact he was taking up about 15-20% of my seat space.

I was travelling semi-cama, you see, rather than full cama. Less space. Little sleep. Although the whole trip wasn't totally rubbish. I found myself sucked into Eight Below, a heartwarming Disney tale of one man's (Hollywood's Paul Walker) battle to save his dogs stranded at an Antarctic research centre. It's called Eight Below because there are 8 dogs in total. And they are on Antartica, below everything else on the planet. Very clever. How do they do it? It's a fantastically difficult battle, but aided by several rescue mates, including American Pie's Jason Biggs, he manages to get to them. Along the way Walker confirms my opinion that his acting is so wooden he should really carry a warning not to smoke around him, lest he catch fire. Two of the eight dogs have already died at the end, but it's still a happy ending. So happy in fact I felt the suprising and unexplainable urge to clap. I suppressed these feelings, however, and concealed my mild euphoria (is that an oxymoron?). 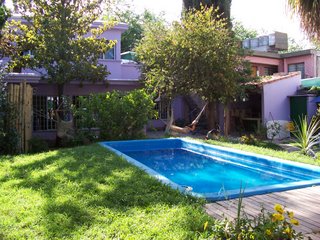 I am staying at Hostel Lao in Mendoza. It's a really nice place (see right). Met up with Anna and Marcus again. We tasted some wine yesterday, although we only visited two Bodegas, most of the day taken up by travelling on buses. I might go again tomorrow and hit some different places. The fastest way to get around is actually to hire a bike, but me, Ana and Marcus agreed this seemed a bit tacky. We are, after all, wine buffs and must travel in far more classy and elegant circumstances. Like taxis or buses. Or walking of course. 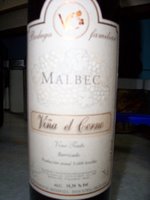 Although our trip was limited, we still found a small place called Vina La Cerno. They let us try a couple of outstanding wines. We were so impressed we immediately bought their expensive
1999 Malbec Crianza which we plan to drink tonight. It was 30 pessos (about 6 quid!). Compare that to the fact we have been drinking wine at around 5 pessos. Real cheap stuff.

Had an amazing steak last night at a place called Facundo. It's a nice place, even if all the customers were gringos! I'd put the steak in my top 3 of all time. It was that good. Of course that top 3 has all been in Argentina. How can I leave this place?? Having said that, I'm getting a bit 'steaked out' right now. Sometimes you go for a meal and get the Bife de Chorizo, a 500g slab of beef. And nothing. That's it. If you don't bother ordering side dishes. Good for protein, bad for everything else. 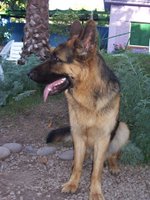 At our Hostel they have a really cool dog called Astor. He looks like a brute but is actually the softest dog I've ever met. He wants to play all the time. His favourite game involves dropping his stick and pretending he doesn't know where it is so you pick it up...and then he tries to grab it from you! Clever. It's no wonder Paul Walker wanted to save his dogs so bad in Eight Below, they can be great friends. He's only one year old and he never gets tired. Very cool dog. I want one.

Mendoza is an interesting place. What is amazing me at the moment is that the kids school uniforms are white cotton type coats that you'd expect a doctor or maybe a butcher to wear. Impractical and unsightly. Mental.

I've got maybe a few more days here then will head up to Cordoba. I don't know if there is anything there. Apparently there's a Condor coloney. I thought they were extinct. That's what Richard Attenborough said in Jurassic Park. Or did he? I'm not sure.

Then I think it's up to Salta. That's the plan. We'll see.

I read a really good novella called The Hawkline Monster by Richard Brautigan. It's a Gothic Western, and it gave me a good idea for a novel of my own in that kind of strange genre. I don't know if I can write out here, or if I have to wait to come home, but I think it's a good idea. Next up I think I'm reading A Short History of Tractors In The Ukraine by that woman who is a lecturer at Sheffield Hallam University where I studied. Apparently it's quite good. That's what the quotes on it say.

Also I must tell you all of one other thing that I think is amazing. At Bariloche in the Lake District of Argentina is a hostel called La Morada. It's high up on a mountain overlooking the lakes and National Park. There seems to be some kind of cult going on their. The owner is a man of around 50ish, a beardy super-good chess player. He has never lost a game to a traveller. Once he said, without a hint of irony, "I am the best chess player in the world." This guy has a strange relationship with two women at the hostel. One of them is about 35 and they seem to be together. But he also seems to be in a relationship with a younger woman who he refers to as his 'daughter'. She works there and does EVERYTHING for him. Cooks all his meals. Even pours his wine. She cleans all day. Apparently she came there for a two day stay...three YEARS ago. And has never left. It's like some kind of strange cult. Like if you stay you can't get out.

On the reception wall is a sign that says - 'If you would like to leave please tell us 24 hours in advance and we will discuss it'. 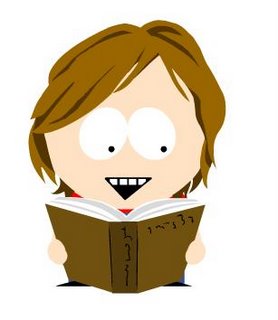 Urgh, this has left me fascinated, but chilled. To lighten the mood here is a South Park caricture that Neil has drawn of me. 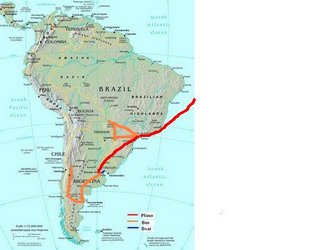 Don't let the scary cult people kidnap you! The Argentine lake district looks lovely. Wish I was there...
Keep updating the blog so we can all track the growth of your hair!
Miss you and love you lots
Your Laura xxxxx
ps I read Marina's book and it is very good, but I'm a bit biased as she taught me journalism stuff at Hallam.

I am Staffan, married to Sylvia - the mother of Anna at hostal Morada and 1004. I read your thoughts and also have the feeling of "cult vibes" from this place. Please writ me and tell us about what you think about Anna and her situation.
Best rgds,
Staffan Fagring: s.fagring@gmail.com