Interesting days in the Bolivian capital as Beat and I visit the city's Coca Museum and risk our very lives on The World's Most Dangerous Road... 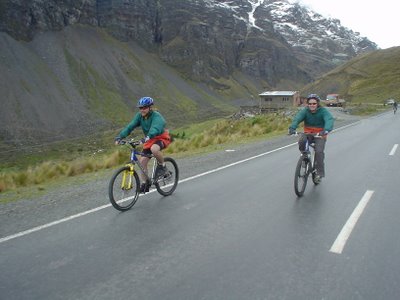 LA PAZ, like a drawing by a third-set art student, is nothing special to look at. It's noisey, crowded and polluted. In short, not one of my favourite cities ever. It's also at 3,600m above sea level and is kind of built on a long slope, making walking any distance uphill a real effort. The place is kind of like one big market with stalls everywhere and of course the usual people begging and the like. If someone, child or adult, offers you some chewing gum or chocolate it makes sense to help them out and buy it even if you don't want it. At least they are working and not asking for money flat out for nothing.

But it does have some good things going for it. First up was the Coca Museum, which is actually my favourite museum I've visited while I've been in South America. It was small and pokey but had loads of information and photos and models and stuff.

The museum takes you from the ancient societies of South America that chewed the coca leaf to colonialisation, where coca leaves are grown, how they affect you, how they are used, chewing technique and cocaine processing and drug addiction. All fascinating. To chew you roll some leaves into a ball and stuff them in the corner of your mouth. After 10 or 15 minutes the leaves soften and the alkaloid properties are released and you swallow the resulting juice. They taste foul, of course, but the desired affect is worth the displeasure. Coca leaves were, and still are, an integral part of the societies that live in this region of (mainly) Ecuador, Peru and Bolivia.

Coca is used to cope with the high altitudes endured by the Andean people living in the mountains. There is simply less air up there (here) and chewing the leaf desensitizes you to altitude, pain, hard work, hunger, thirst, tiredness. In other words it was used extensively by the Spanish to work the natives to death. Horrible.

Even today miners in the silver city of Potosi won't go into the mines without coca and spend about 12% of their yearly income on the leaves!

The place really interested me. The more recent history of cocaine being used as an anesthetic, pain killer and even soft drink was fascinating. Coca-Cola was invented by a pharmacist in 1886 and contained caffiene and cocaine untill about 1912 or 1914. Imagine the buzz that would give you! Apparently Coca-Cola still use tons of coca leaves to flavour the drink. The 'cola' bit comes from the cola nut of Ghana, if I remember rightly. In the museum there were cool adverts and posters advertising 'Kokaine' when it was still legal, as a substance to smoke or as a remedy for toothache! Fantastic.

But the really interesting aspect of the last few days was our trip on the World's Most Dangerous Road, or 'The Death Road' as it's also known.

First, some facts. The Death Road is the teacherous pass between La Paz north to Coroico. It descends from 4,700m to 1,200m in just a length of 83 km of road. That's a drop in altitude of 3,500m! So you go from the snowy ice capped mountains down to humid tropics in just a few hours. Incredible.

It's called 'The Death Road' due to the number of accidents every year. Annually, 26 vehicles plunge over the edge of the road into the abyss on average, killing between 200-300 people. The reason for this is usualy bad/drunk drivers, terrible visability and weather conditions making the road unstable. Also, at points the road is only THREE METRES wide with no barriers, and drops of over 1,000 metres! It's really quite dramatic. 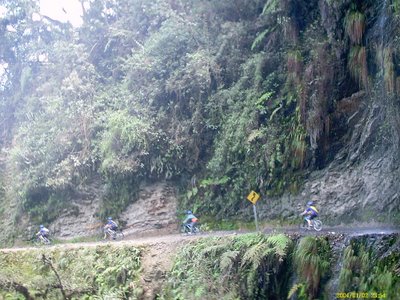 Now I know what you're thinking, this sounds kind of dangerous right? In addition to the countless vehicles that sucumb to the perils of the road every year, 9 bikers have died cycling the pass. But riding the Death Road is actually one of the biggest tourist attractions in Bolivia, and there are many different companies that offer the trip. The biggest and 'safest' companies, such as Gravity, charge about 65-75 US Dollars. Gravity in fact took out their last group on 9th December, as they state as their professional opinion that during the wet season (December-February) it is TOO DANGEROUS to take people down the road. Rubbish! Our company, El Solario, charged 35 US Dollars and said they go out all year round, rain or shine. Rock on!

And we found them to be a very good company indeed; safe, organised, friendly. The day we went out was bright and clear. Perfect. We were a group of 6 with me and Beat joined by two more Swiss, two Ozzies, our guide Christoph and driver Alberto, who has to drive The Death Road everyday. Lucky him. Beat was happy as he coud speak Swiss-German all day. 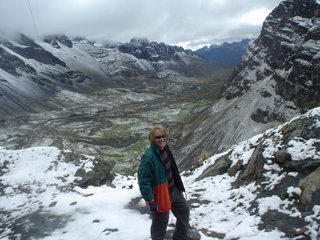 I was a little nervous before starting off. I'm no adventurer, I don't even like going on the fast rides at theme parks. This was one hell of a ride, however. The first part of the road is all (icey) asphalt but really pretty safe. It's only when you descend down into the foresty areas you can see the dangers of driving the road in poor conditions. You ride through waterfalls along gravelly, stoney surfaces. While all this is quite fun, the pinch of reality hits when you see literally loads of crosses marking places where vehicles have fallen away over the side. Occasional tires and pieces of metal come into view just below the edges of the road.

I, of course, suffer badly from vertigo. But riding takes alot of concentration. Although we stopped every so often, there's no time to caually observe the various drops beyond the road in front.

It took about 4-5 hours cycling from start to finish. The road is virtually all downhill, the few km uphill were a killer at that altitude. I was by far the slowest member of our group on the actual dangerous bits of the road, but it's not a race! You just have to go at you own pace. Rather that than end up a statistic. 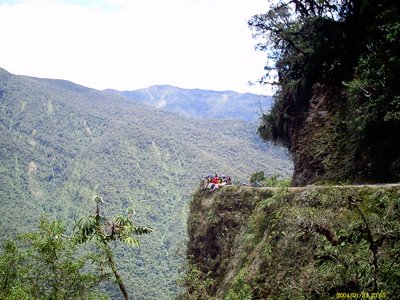 The trip is advertised on the danger/adrenaline aspect but we found that the most enjoyable aspect of the day was the amazing scenery and the way you plummet from Andean cold climate, wearing jackets, gloves and trousers to the humid valleys wearing t-shirt and shorts and getting bitten by damn mosquitoes.

After the last leg of the trip we all enjoyed one of the best cold beers I've ever had. I was sweating and sore and had really had my fun by that point. Any further and the experience would have been pure endurance.

We then had a nice lunch and Alberto drove us back up the death road to La Paz, which was more nerve-wracking than cycling down as you have no control. I did NOT sit on the side of the mini-bus which overlooked the precipice. No way. When we hit asphalt again I breathed a huge sigh of relief. 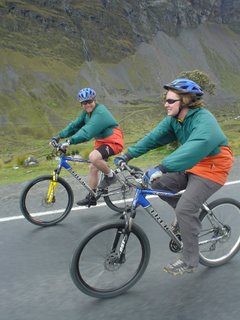 Although the road seems dangerous it's relatively safe to cycle. People who get hurt push their limits too far. Same goes for the drivers that fall victim to the road. You have to know what you're comfortable with and stick to that!

Of course after every such 'adventure' excursion you get a free 'I biked/survived the blah blah blah...' t-shirt. The one from El Solario was particularly bad. I don't get the sizes over here. I just got an 'Inca Kola' t-shirt that's a medium and it's bigger than my Death Road T that's an XL. "Go Figure," as our friends from the colonies would say.

They have actually just opened the new 'safe' road from La Paz to Coroico so the traffic taking on the Death Road will drop dramatically. Only buses and cars for people who live in houses and villages along the pass will still be using the road. Along with thrill-seeking tourists of course. But the number of deaths on the road will virtually drop to zero, which will actually be bad for business for biking companies. It's a funny old world.

So I am safe and sound in La Paz. I'm staying at The Adventure Brew Hostel. It's quite good; comfy, nice building, internet, dvds, book swap and they make their own 7% beer which is really quite nice, especially at 6 Bolivianos (40p) a go.

Yesterday Beat and I went for an excellent but extortioate Japanese lunch. We had fantastic sushi with soup and vegtables and other bits and bobs. However, the wine we ordered was not 40Bs but 120! Back home 8 quid for a bottle of wine in a restaurant is fine but here it makes your head spin. Still, it's nice to live like a king on the money of a pauper.

Tomorrow we head to Copacabana and the Isla Del Sol, where the Incas believed people were created by the Sun Gods, or something. We'll find out more later. Hopefully we'll be on the island for a few days then spend Christmas at a nice place overlooking Lake Titicaca.

Today I have nothing to do especially. I got the bus tickets, swapped some books, had a pancake breakfast. So all the important things taken care of. I might go to the modern art museum or the cinema. Not sure. I'd like to write more emails but have got really into this blogging and if I spend too long in an internet café my brain starts to turn to musha and I start telling people in Spanish that I don't speak English. Yeah.

Some more pictures from The Death Road...(including our driver, Alberto) 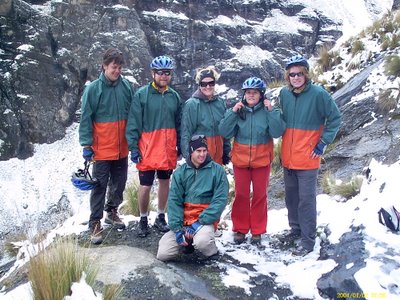 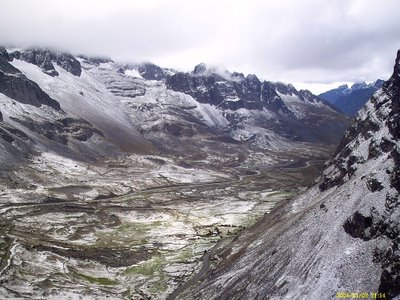 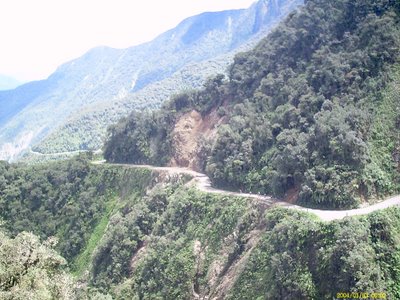 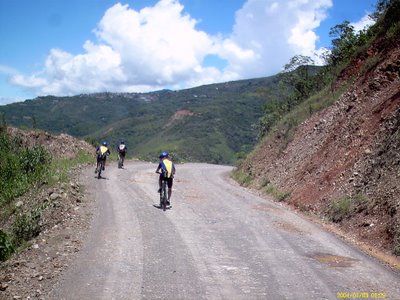 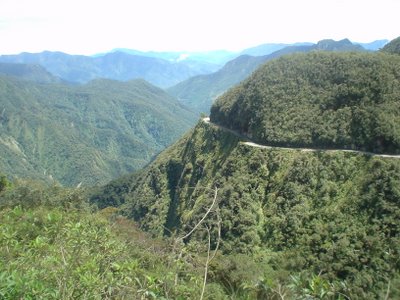 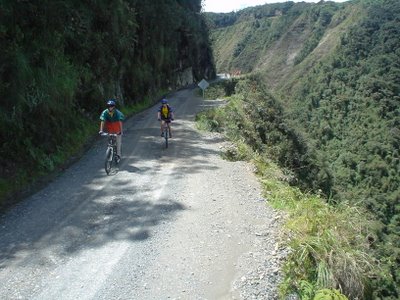 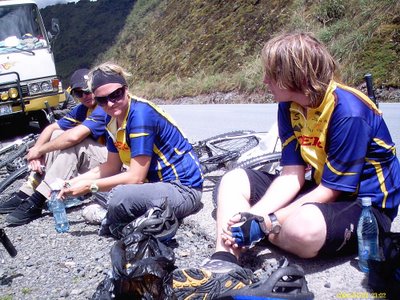 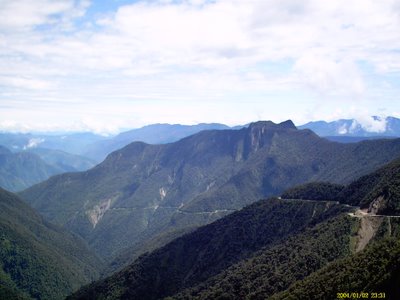 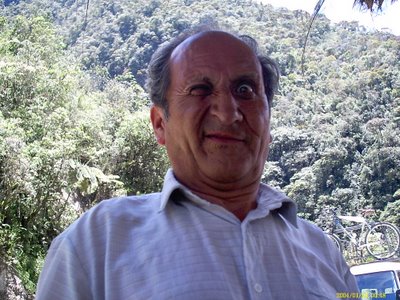 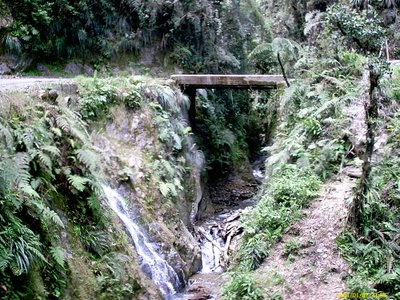 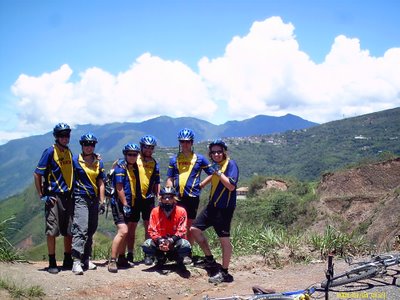 Our group at the end of 'The Death Road'. Six surviors out of six!