More waterfalls. And are fascinating archeological sites really just a pile of stones?

THE LITTLE town of Samaipata is two and a half hours drive from Santa Cruz. Beat and I arrived here to...actually I wasn't sure what we were doing there. It was supposed to have some cool stuff. We were staying in Hostal Andorino, which served the best breakfast I've had in South America so far, fresh fruit and everything. Usually you have to make do with stale bread and dulce de leche. 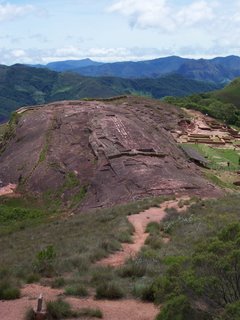 We met up with another guy from Jodanga called Alan and went on a day-of-fun type excursion together. First we headed up to El Fuerte(left), which has some pre-Incan ruins. Apparently, if the badly translated info sheet is to be believed, the site dates back to 1500 years BC. BC! That's a lonnnnng time. It was used as a meeting/market type place I think. Or possibly a spiritual ceremonial site. Or maybe it was used for sacrifices. There's this European guy who thinks it was an alien landing site, but I don't think he has any infomation to back this up.

Anyway, so the site has carvings, nooks, crannies and some discovered ruins of buildings and houses. But really, when it comes down to it, it's just a pile of rocks, I think. But it was fun to walk around! And it was something interesting and cultural to do rather than watching dvds and that's important. Don't get me wrong, I think ruins and stuff are impressive and interesting, but maybe they need to be more complete to be more compelling and fascinating. 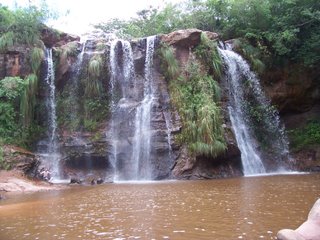 After the pile of (interesting, pre-Incan) rocks we spent the afternoon at Las Cuevas, a lovely area with two amazing waterfalls. I slipped on a slippery rock and hurt my arm but it was nothing serious. Nothing could dampen this really quite beautiful little spot. The two waterfalls are conected by a little river/stream which I walked down. Really fun, felt like a jungle explorer, especially when you leg sinks down in sand up to the knee. Bit weird. I didn't have have any swimming stuff but it was so hot that I just ran in in my shorts, which meant I was wet all the way back but it was worth it. And waterfall water is quite powerful stuff. I alsways thought I could survive falling over a waterfall but now I'm not so sure. And these were tiny waterfalls, too.

I also got quite burnt that day. But again, it was worth it. Really good day, really great scenery. Some of the rides in cars and buses here just yield the the most amazing views of valleys and stuff. Going through the hot, humid rainforesty areas you get all the mist floating through the trees and everything. It looks epic and totally cool, like you're in a documentary or something. I'm trying to underplay it all to emphasise how amazing it is. I don't know if it's working.
Posted by . at 3:22 pm