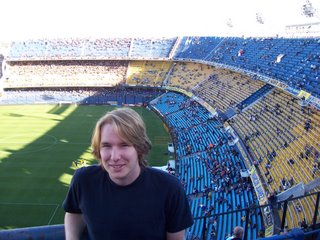 After almost a month in Brazil I make it to Argentina.
IT TOOK A total of 9 hours including a taxi, plane, bus and taxi again, but finally I made it to the ´city of good wind`, as Buenos Aires may or may not translate to. Panic ensued at the Airport. Flight 247 from Sao Paulo to Buenos Aires contained a school hockey team, unaccompanied children, a man afraid of flying and a honeymooning couple. Every disaster movie I´d ever watched told me this meant only one thing - snakes on the plane!

Deep breath. I calmed down. Checked in. Got ON the plane. Thankfully it was completely safe. In the end I´m not even sure there were any snakes on the plane. In-flight I watched Hollywood´s Jennifer Aniston in The Break-Up, which was enjoyable, but still pretty average.

I have been staying at Hostel Estoril. It´s top rated on www.hostelworld.com and I can see why. It´s clean, comfy, and has a lovely colour scheme that emphasises WARMTH. Mine is a 6-bed dorm and I have been sharing with a collection of interesting characters, including Cesar, who is a big hairy Brazilian bear who can speak only Portuguese and Spanish. Of course I can only speak Inglés, so our conversations have never risen above the rudimentary levels. He is however, incredibly friendly, and wants to talk anyway! 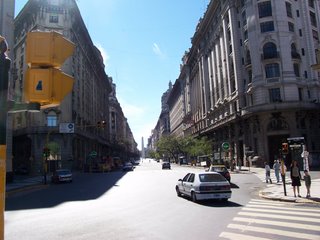 Another surprise on arriving at the hostel was seeing James from the Pantanal. I have said goodbye to him twice but am getting used to bumping into him. He has not ventured onto a horse since the Pantanal and seems more together and in command of things in an urban jungle.

Buenos Aires is a complete change from Brazil. Apparently this place "looks like Paris, tastes like Italy and moves with the pace of New York," if my Lonely Planet guidebook is to be believed. On the evidence of the last week I´d pretty much agree. I loved Brazil and the way nothing happened on time (if it happened at all), but Buenos Aires is a different kettle of fish. It´s clean, sophisticated, safe. People here put a lot of effort into the way they look. I fit right in. 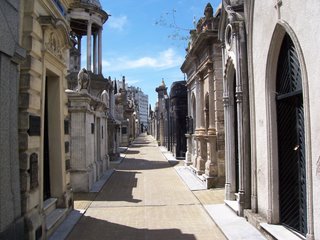 There aren´t as many touristy things to do here. One of the biggest tourist attractions is the Recoleta cemetary. No, that´s not a joke, because it´s unlike any cemetary I have ever seen. It´s not graves but masoleums, big tombs with crazy designs and architecture. It´s fascinating...and chilling. The place is massive and looks like a city. OF THE DEAD. It even has streets and avenues, whcih I´ve just realised may also be streets. I remember thinking that the masoleums looked like little houses and inside there are spaces next to the coffins given the impression of a bedroom. Creepy. Almost as if the coffin might open any time and the occupant fresh-up ready for- actually I don´t know what I´d do if I was in their position. Anyway, it´s really interesting and I can´t help wondering what the price of real estate is in the best areas. Some tombs are just by-passed completely by visiters. Sad. I saw Evita Péron´s family masoleum, where she is buried 7 metres down. Flowers. Tributes. Tourists. 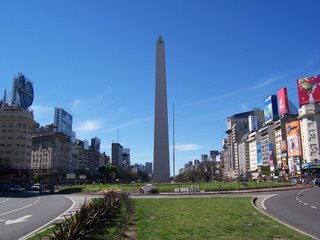 The 67m Obliesk on Av. 9 de Julio commemorating 400 years since the city was founded.

The big draw of Buenos Aires for young hipsters and scenesters is the nightlife. We went to a club called Mint on Friday. Apparently it´s where all the cool kids go, so I fitted right in. It was like stepping into the future inside. Big sunglasses and dancing I´ve never seen before. It was a pretty crazy, long night. Everything in Buenos Aires happens later. You don´t go out to dinner before 10 or 11, which I think is great but means that clubs don´t open untill 2. When we went to Mint I got back at 7am. I was the first to leave. 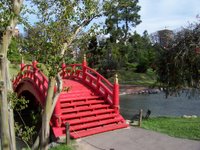 Went to the Japanese and botanical gardens yesterday. There are some in every city in the world I think, but they were still nice.

This city is great for meat and wine. The rumours are true. While going out is fun, I think I´d rather spend a few hours getting stuck into some quality tender steak and tasty wine. I´m on a mission to find better and better steak and wine constantly. Due to the strength of the pound (god bless you Gordon) an English gentleman abroad can expect to pay about 4 quid for a good meal and the same for a decent bottle of Malbec from Mendoza (where I hope to visit). In supermarkets you can get good wine for about 2 pounds. How amazing is that? Despite the fact that this is a rhetorical question there is, in fact, an answer. The answer is very amazing.

So I´m on a quest to find the best wine I can. I may even break the 5 pound barrier. I need to buy a shirt and jeans before I can venture into the posher restaurants. 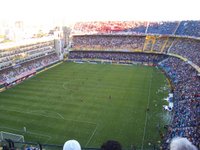 Yeah, so life is good in Buenos Aires. We went to see the Boca Juniors play on Sunday. They won 3-1 althouth I missed the 2nd goal because I was distracted by the fact that when the crowd jumps up and down the stand shakes. It was a good game and I have bought a Boca shirt, although not changed my aliegence (no idea how to spell that) from Plymouth, who are doing very well back home.

I also have started wearing my contact lenses, making me feel loads more confident. For some time now I had an eye condition making me unable to wear my lenses but now it seems from time to time I´ll be able to put them in, go out and NOT talk to any attractive girls. Or ugly girls. What´s the point? Am I being serious or not? Even I don´t know. 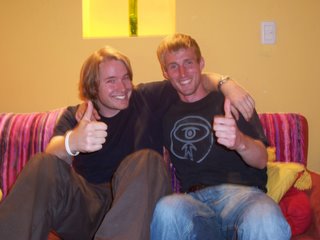 Today was very interesting as I awoke from my bed to find my friend Julian standing over me. A bit surreal. He was here for a day before heading up to Bolivia. I´ve been trying to meet up with him for ages but he´s been (literally) at the end of the world. It was nice to spend the day with him today. We went to a restaurant where I had possibly the best meat I´ve had here so far. Fat, thick, juicy, succulant, arrrggggghhhhhhhh. No wine, but then it was 1pm. Then we had ice cream and I got it all over myself, which is normally something he would do. We chatted about Rio, hostels, Patagonia, buses, steak, different countries, South Africa of course, and LOTS OF THINGS ABOUT CATHERINE. We got back to the hostel and had an improvised and extensive photo shoot. The picture I´ve selected here is really quite beautiful.

Tomorrow I check out of Hostel Estoril and move one street to the Milhouse hostel. It´s famous everywhere amongst travellers in South America for being a serious place to PARTY. People have left the hostel, city and possibly even the country from PARTYING too hard there. I´m sure I ´ll fit right in. But in all seriousness, it´s an interesting change. 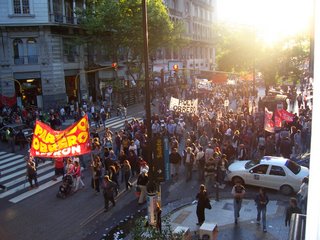 Just outside there has been a massive protest through the street Avenida de Mayo where I am staying. It is to do with a man who recently went missing after he was a witness against Bad People during the Argentinian Dirty War between 1976 and 1983, when 50,000 people disappeared. Some think he was attacked as a warning to other people who testified against the Bad People. But outside there are a lot of socialist mentalists just making trouble I think. Like the other day they were moving the body of former President Juan Domingo Peron to a new masoleum outside Buenos Aires and it all kicked off majorly, fights and scuffles between different trade unions or something. Now I think about it the BBC might be a better source of information than me.

On the literature front I read Richard E. Grant´s memoirs, Swallowing Grandma (which you´ll remember was described as "warm, witty and honest" in the Sunday Times) and now the plethora of choice at the book exchange library has given me 4 Blondes by the woman who gave the world Sex And The City. I intend to come back a fully fledged metrosexual or something. I´ll find time to read it. On Monday I think I´m heading down to Puerto Madryn in Patagonia, about halfway down the country. Apparently you can see whales that come up to, but do not capsize, the boat. Hopefully it´ll be okay. It´s a 18 hour trip I think, and I heard a lot about Argentinian buses being the best in South America. I´ll probably write a blog entry just about the bus.

But going to the Milhouse Hostel I´m sure I haven´t run out of history in Buenos Aires just yet... 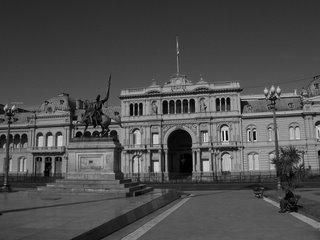 The Casa Rosada in Plaza de Mayo, where Eva Peron did her famous rallying in 1946.