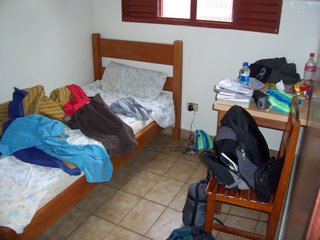 Spotting and fighting wildlife in the wetlands below the Amazon basin.

I awake from bed this morning to find myself in a PRIVATE room. Blink. Yes, my own toilet, shower, bed. Excellent. How did this happen? It was part of the 4-day deal that took me to the Pantanal, a wetland national park below the Amazon basin. The park is half the size of France and is shared between Brazil, Bolivia and Paraguay.

I embarked on the journey along with a Frenchman, Ozzie and 3 guys from Ireland to base camp in the Pantanal, about 4 or 5 hours from our hostel in Campo Grande. I´m not going to lie here, the camp was pretty basic. Hot and sweaty from the trip, I was dying for a cold shower. A fellow camper told me that was good because cold is the only setting.´Nice.

The Pantanal is a series of interlocking rivers, streams and ponds with wide stretches of open plains and boggy swamps. So why do people go there? Because unlike the Amazon where there is loads of dense foliage for animals to hide in, the Pantanal is somewhat more open and therefore a better place to see wildlife. We spent the days in groups of 6 or 7. Our guide, Levy, told us all about how people use the trees to eat and make houses from, which was pretty cool. They have those tree branches you cut and pure water comes out. Refreshing.

There were some different activities you could do on the trip. We did some horse riding. Interesting experience. I´ve never been on a horse before. Generally I had control but they all want to follow the horses in front so it´s a mission to go wander off on your own. Also, when mad Irish people start galloping past, your horse breaks out into a very scary run which may make you hang on sideways. Scary. Which didn´t happen to me of course! Still sore from riding a few days later. 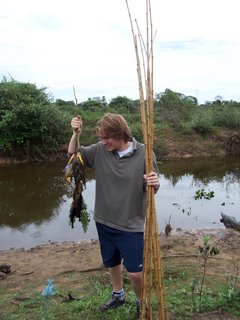 Then we went Piranha fishing. Was very cool. You stand on the bank to this little river and try and hook them with fishing rods that are little more than bamboo shutes with string. I caught one. Very powerful things. Nasty teeth. Levy, our guide, caught several meaning we had plenty to eat for lunch. The whole experience was cool as all the time there are loads of alligators in the water and on the bank next toyou. However, they are the 2-metre ones afraid of humans, not the 5-metre ones in the Amazon. This means you can run at them shouting ´Arghhh!´and prod them with your rod and you´re (pretty much) safe.

We also went on an eventful boat ride down the river. Eventful not because we saw any animals (we didnֲ´t see anything really), but because we hit a log in the water and fell out of the boat. Fell out into the PIRANHA and ALLIGATOR INFESTED water. One of the Irish guys had a cut on his ankle and some baby piranhas tried to have a nibble, but apart from that we were fine. Levy said that that doesnֲ´t usually happen, although aparently loads of people come off the horses. Hmmm. 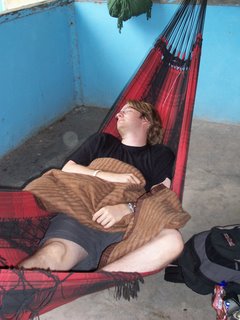 The camp food was fine. Simple and tasy. We slept in hammocks. Surprisingly comfortable. Irishman snored weirdly all night. Every night. Less sleep than I would have liked.

One night we got an insane and intense tropical storm. I´ve never seen anything like it before. Constant lightening for an hour. The sky practically light the whole time. Rain coming in, soaking everything. Everyone laughing and shouting, amazed. Next day we talked to guides and asked them how incredible they thought the storm was. They were like ´yeah, so-so,´ shrugging their shoulders. All in all we saw loads of birds (storks and macaws, things like that), alligators, otters, wild boar, monkeys, piranhas, racoons, deer and weird giant water rodents called capabearo or something like that. They were cool.

So the trip was good, nice group of people, few mosquitoes (the hot, wet season is a few weeks away). Apparently it was a good time to go as in January the temperature is like 50 degrees and you get a ton of mosquitoes in your mouth just by talking to someone. Crazy. Yeah, it was one of those trips where you really feel like it´s a cool time AT the time rather than laterthinking back, allowing nostalgia to take hold. There is no USB port on this computer so I´m going to have to wait till Sao Paulo in a couple of days to upload some photos. I´ll put my favourite ones on here and all of them on one of those kodak image gallery things, if I can. 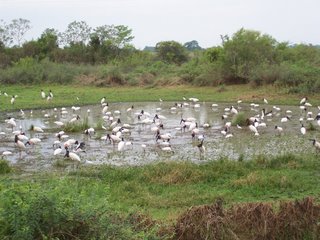 ight to Beunos Aires. Hopefully I won´t be stuck in Sao Paulo for too long. It´s another 14 hour bus journey, but I have a book called ´Swallowing Grandma´, which the Sunday Times describes as ´warm, witty and touching´. It´s a bit of a girl´s book but there aren´t too many Waterstones around, you get me? It´s by an English writer and there is much talk of jammy dodgers and tea, which is very bizarre compared with my current surroundings. I finished reading Richard E. Grant´s memoirs, which Neil gave me. It was very good. I´d go so far as too strongly recommend it. I feel, as when I was in South Africa, much reading will be done on this trip.

To check out more about trips in the pantanal go to www.pantanaltrekking.com
Posted by . at 8:32 pm