I visit Bolivia's prettiest city for 10 days and try and learn some Spanish while I'm at it.

THE JOURNEY here was not pleasant. After the Salt Lake trip I came down with a touch of something I will describe as 'travellers stomach'. Interpret that as you will. I made the 10-hour overnight trip on a bus with no toilet. Great.

As I arrived into Sucre I had the hassle of trying to arrange a room at a hostel at 5.30am, which wasn't a lot of fun. However, from this dark cloud emerges a becon of light. For it transpires that Sucre is, in fact, a beautiful, charming colonial city. The hostel, Backpackers Sucre, is an olden days style 18th century type place with a courtyard, patio, trees and all the other 18th century trimmings. Best of all, for the last 10 days I've had a quiet, comfy private room with cable TV (hearing Darth Vadar dubbed into Spanish is really quite an experience) for less than three quid a night. Pretty good. 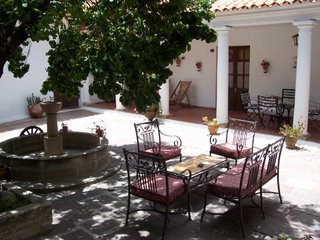 My main reason for being in Sucre was to learn some Spanish. I am a complete beginner and felt pretty stupid learning how to say the alphabet (the Spanish alphabet of course. I know the English one). It was like I'd been in a car crash, lost my memory and was having to relearn everything again like the words for chair and spoon.

But it needed to be done. Every weekday afternoon from 2.30 to 6.30 I learnt my verbs, adjectives and pronouns with my teacher Carla, a Sucre local. She was nice enough, but I never felt completely relaxed with her. Someone else said the same thing about her. Strange. The school only charged 6 dollars an hour. Three quid an hour for a tutor would be hard to find back home.

It was weird being back at school. I had a exercise book with a cartoon mouse on it. I noticed the mouse was playing basketball, which is completely implausible.

I had homework as well, which was interesting. I thought of all the hours and years wasted learning German, which is spoken only by Germany, Austria and the Swiss pretty much. Instead I could have learnt Spanish which is spoken by, pretty much the WHOLE OF CENTRAL AND SOUTH AMERICA. And Spain of course. And a few other places for good measure. Madness.

It was intense with all this learning. I woke up one night shouting out loud, "conjugate the verb, CONJUGATE THE VERB!" 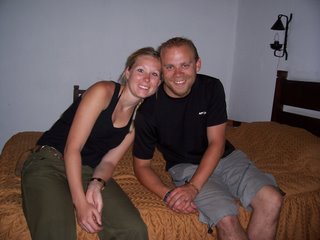 Outside of school I have been socialising with a nice group of people at the hostel here. There was Jenny from England, Sig, Mads and Mie (right) from Denmark and Patricia from Italy to name a few. Nice people. They have all since left and I have befriended a new group briefly. Importantly in this new group is a guy called Beat, a 34-year old ex-banker from Switzerland. No he really was a banker. Is. He's not sure what he'll do when he goes back home. (He speaks English as well as German!). He is going the same kind of route as me so we're going to be travelling together for the next few weeks. I'm leaving here a day earlier than him, going to Santa Cruz tonight. We've been recommended a place called Busch, but I'm not entirely convinced it exists, which would certainly make checking in problematic. Another option is Jodanga Hostel which has NO CABLE OR PRIVATE ROOMS. But it does have a pool. It's a bit pricey (almost 3.50 pounds a night) but it looks the best option.
Hopefully we'll do some day trips and then go to Cochabamba and then up to La Paz. Our aim is to spend Christmas at the town of Copacabana on Lake Titicaca, before heading to Cusco in Peru for New Year's eve. That's the plan, anyway. Things can always change. But it's a rough idea. From then on, who knows, although I fly to Sydney on Jan 22nd-ish (must check) so won't see much in Chile. 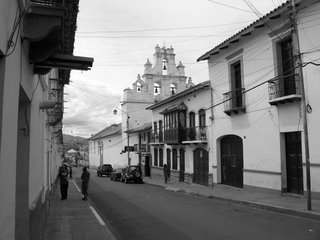 Sucre is a lovely place, 'spoilt' only by an abundance of beggars. It's simply a fact of life as Bolivia has a great amount of poverty. Walking around the city is fantastic. They have great Churches, houses and a walk up to overlook the city which is really quite splendid. There's an impressive cemetary and a park with a miniture Eiffel Tower.

It's a really nice place to spend time and I now feel fairly at home here. We've been out to different restaurants and cafès. I've discovered I have a weird ordering problem in restaurants in that if something looks unusual I have to have it. This is a good thing when you get something called 'Mondongo', a nice traditional dish, but GOD HELP YOU if you go for the 'Bolivian Surprise'. It's supposed to be the dish-of-the-week, but basically it's whatever the chef has left over; pasta, potatoes, chicken legs, and really, really HOT sauce. Not good for poorly Andy's stomach. The 'Bolivian Surprise' has now become a code word for...bad things.

Laura quizzed me on the dress over here recently. Like most young people in South America, in Bolivia the young people wear western style jeans, t-shirts, trainers and the slightly older people wear suits. But the old indio women wear crazy patterns and bowler hats and their hair in plats. I'm getting used to it but it's still pretty odd. I want to get lots of pictures but they always ask for money, so it's difficult. Hopefully I'll get some pictures up soon.

The Bolivians are very different from Argentinians. About half the population here has indigenious ancestors and they seem more passive and quieter than the Argies. I'm glad I came to Bolivia, it's a fascinating place. Really feels like real South America.

So my time in Sucre is almost up. I'm almost over my stomach thing now. Strange that in one of my favourite places I've visted I've felt the worst on the trip so far. When you feel weak and unwell everything seems like an effort. But I'm better now and I've really enjoyed it. The hostel, people, travellers, classes and everything has all been good.

On the book front I've finished Charlie and the Chocolate Factory. Still prefere the Gene Wilder film version, and now I'm onto Freakonomics, a book about, er, freaky economics. I've also got an interesting book by a Japanese writer called Norwegian Wood. Hmmm. My reading has suffered from classes, cable and general socialising. I'll crack on now.

I am new to blogging, but liked your spot alot. Thanks for taking me on your trip. :)