Adventures in Iquacu National Park with some Germans? 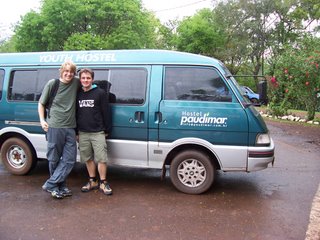 I'VE SPENT the last few days in Foz do Iquacu with german guy called Axel (I agree, it´s a cool name), whom I befriended in Rio. Foz is home to probably the most beautiful waterfalls in the world. No photos can do justice to them. And it´s a good thing because it was a 16 hour bus journey to get here from Sao Paulo.

In Brazil you just can´t believe the distances. This country is hogging most of South America. To do the whole place would just be stupid (a Swiss guy from Rio was getting a 45 hour bust trip up north to Natal - crazy).

Where was I? Ahh, the falls. Yeah, they´re incredible. They´re in a national sub-tropical park and the whole place looks like a mystical landscape imagined by Lucas on another world, but without being ruined by his CGI and quasi-adolescent fantastical narrative arcs. Me, Axel and another german guy called Dominic spent two days walking round these falls, which spread over Brazil and Argentina. 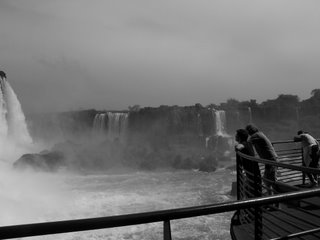 The money shot of the trip is the Garganta del Diablo, or ´Devil´s Throat´, which is really, really impressive. Apparently 1.2 million litres of water per second pass over the falls. Who the hell worked that out? I don´t know but I´m not going to question it. I´ll try to get some pictures up soon.

The city of Foz is crazily on the border of Argentina and Paraguay. We went over to Paraguay yesterday for lunch. It´s madness. No border control or anything. We just walked straight through. Everything there is a cheap imitation of watches or sports clothes. Anything authentic is guarded by men with machine guns and shot guns - even the local Sports Soccer type shop. I never thought I´d say, ´´we´re safe now we´re back in Brazil.´´

We also saw the world´s biggest hydro electric dam. But that was rubbish. 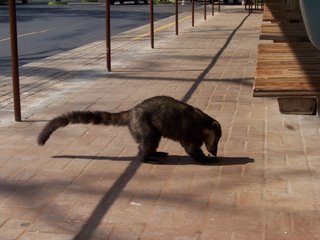 The hostel I´m in here is lovely and has got a bar by a pool, comfy dorms, free breakfast - and it´s only about 5 quid a night. Bargin! I´m going for a swim in a minute, after I sort out my next adventure - a trip to the Pantanal, some wetlands beneath the Amazon. I´m going on a 6 or 7 person tour with a guide over the next few days. I think it´s gonna be an adventure, there´s a base camp and everything! Hopefully I won´t be eaten by the reptilian residents of the area. Will report back in a few days...
Posted by . at 6:45 pm 2 comments:

Getting up to date 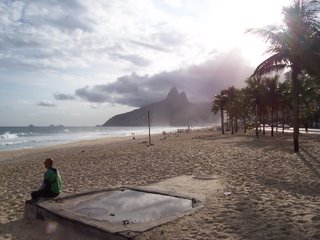 Okaaaay, I need to go over 'the story so far'.

Where to start? The beginning, maybe. Here goes.

I flew into Rio Sunday 17th September and was met by Marcello, the only Brazillian who doesn´t like football. Stayed at the El Misti hostel for a week in Botafogo, a middle-class neighbourhood. Pretty safe. El Misti is a ´meeting people´ hostel, singles, couples, groups all happy to meet up and go on day trips.

The sights were seen, and seen well. Sugarloaf, Christ the Redeemer, etc. Some AMAZING views. Went to two games at the Maracaná stadium, seeing an exciting total of just ONE goal. Slightly dissapointed. Still, a change from watching Plymouth Argyle.

Rio seems safer than I was told. Not as intimidating. Walking the streets feels ok, pockets safe. Went to a ´funk party´at a club in a favella (slums), but was totslly safe. Amazin 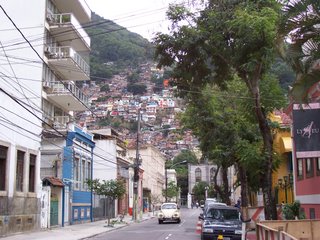 g dancing, though not by me.

Food in Brazil in plentiful. They have these lunch buffets where you load up your plate and pay for the weight! Cool. They´re called Buffette a Quilo. Because of the weight. Per Kilo.

From Rio I went to Sao Paulo. It´s a dump. Got stung by taxi from bus station. Driver didn´t know where the hostel was. Anxious moments. Finally arrive, making my way over the bodies in the streets (joking). Hostel cold and glad to only spend one night.
Posted by . at 6:12 pm No comments:

Hey everyone, I´m finally getting around to setting up a blog to bore both myself and everyone else with my tales from around the (metaphorical) campfire. Stay tuned and don´t touch that (again metaphorical) dial....