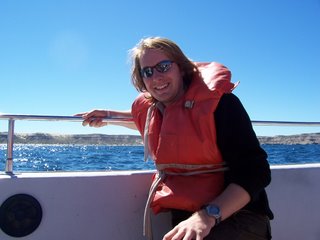 THERE'S ONLY one real reason to come to Puerto Madryn - to visit the Peninsula Valdes, which hosts some cool wildlife. It is for that reason I have found myself at Los Choiques Hostel ('The Ostrich', I think).

My day trip starts at 8am. It's an early start for me after Buenos Aires, and I'm still digesting a weird pizza I had last night. The guys on my trip (a little mini-bus of us - oh, being a tourist!) seem pretty cool. Maria, our guide, immediately starts quizzing us on our wildlife knowledge of the Valdes Peninsula. She then finds out our names and asks us what someone else is called. Cruel. A hungover fellow from England called David struggles with Maria´s questions, although he gets his own name correct. David is one half of a couple with an American woman called Gretchen. They are good people and let me befriend them for the day, which is nice as the 12 other people in my group, including David and Gretchen, are COUPLES. I learn that David and Gretchen are in fact fishermen, or fisherpersons, who work out of Seattle. They have done some varied travelling before including an overland trip in Africa which sounds interesting. 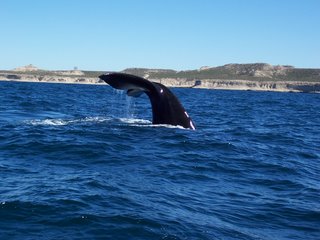 The Peninsula Valdes is home to several different species that go there every year to breed. First up for us is some whale watching. The Southern right whale is a curious creature and does not seem to mind a boat of people moseying up to them while they try to get some breeding done. This was a pretty incredible experience. The whales come right up to the boat and we can get really close to them while they're, er, courting with each other. My pictures weren't particularly brilliant, to be honest, but it's again one of those things where pictures don't quite do the situation justice.

I was enjoying it all very much until about 20 minutes from the end of the trip. We'd been out about 45 minutes and the boat was VERY choppy. I began to feel the feeling of one who feels very sick. Initially I thought I had it under control. But I didn't. I ran to the back of the boat to release unto the sea my breakfast, which included some nice pastries. A middle-aged woman patted my arm in a sweet way. I told her I'd eaten a bad sandwich. She nodded. She understood. 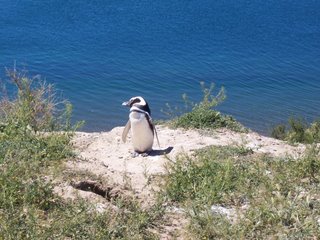 After the whales we drove for a bit to see some penguins and elephant seals. The penguins really don't seem to care about people being around and just go on doing their thing, waddling around. They really are very funny when they walk around. They live on the beach this time of year and have little houses in the hard sand that they emerge from and disappear into. The elephant seals are pretty cool, although in my pictures it just looks like I've been taking photos of slugs in a sandbox. Elephant seals also move around in an amusing way , a bit like fat, drunk snakes trying to get into bed. We didn't see any Orca whales on this day but I am told that Orcas do hunt seals and pick off the babies. I remember Attenborough narrating just such a scene on Blue Planet. I mean, Free Willy was cool and everything, but Orcas are cruel creatures, in Blue Planet they were throwing a seal's carcass between them like some KIND OF GAME. No shame, those Orcas. They make me sick. I Had a nice lunch at a restaurant nearby.

It was then time to see some sea lions, who as it turns out, aren't actually related to lions at all! Again, they are high on the cute-animal-o-meter, right up there with penguins and baby polar bears. Again, they were cool, but don't really do much. All the seals we saw today were kind of sun bathing on the beach, occasionally wriggling down to the water to cool down. Why weren't they fighting for the attention of females as they were suppsed to? Never mind, still good stuff. 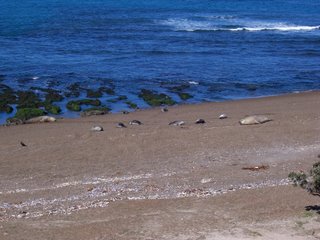 All in all, a good day, despite the sickness. Speaking of sickness, I am quite hungover as I write this. I met up with James again, who is in Puerto Madryn before going to El Calafate to see glaciers. We went out with an ozzie and a nice girl from Scotland. I felt ok, but I think we had super-strength caprinhas and I got back at 4am. I haven't been sick, but I feel quite unusual. I have a bus ride to El Bolson in 3 hours. It's gonna be tough, especially as I have elected for Comun, the lowest class of bus, just to try it out. When I get to El Bolson there are a number of places that are good that I might stay in for my second night onwards, but my first day I amstaying at a lodge type hostel which is only 10 pessos a night. That's one pound eighty. Practically free, so I'm not expecting luxury. We'll see.

The hostel I'm in in Puerto Madryn is small but nice. Everyone here seems to stay at the HI hostel, El Gaulicho or something, but this joint is ok. Comfy beds. And nice staff. I have befriended Claudio who is one of the guys who works here. He has taught me much about Maté and I even made dinner the other night. Crazy. Also, I am the only person here whose first language is English, which is interesting!

Right, I may add more later, but right now I need a lie down and then get some food for the bus trip. 13 hours. I 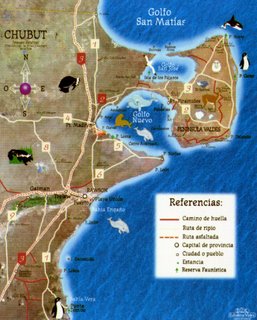 don't think there will be bingo or red wine on this journey.

Oh, and here is a map of Peninsula Valdes. The sizes of the animal drawings are not accurate.
Posted by . at 8:43 pm

Sounds wonderful. Thank you for sharing.

Ask your Seattle fisher friends if they posted something on travellerspoint on the LP lonely planet forum about sailing somewhere, i am sure i read a post from a fisherpeople couple from Seattle.
Have you found the ex-pat Welsh community in that area yet?

Baby if I could have afforded the trip I would be there. And we would have been a couple with all the other couples. Don't worry we will see lots of things together in South Africa - penguins and dolphins and hefalumps.