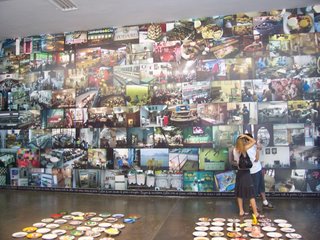 Strange days hanging around waiting to change my flights.


SAO PAULO. The biggest city I´ve ever seen. There are almost 18 million people living here. Madness. Although many of those are merely existing. I´m here before flying out to Buenos Aires. I had to change my flight as I was due to fly on the 19th October. I´ve now moved it foward. To FRIDAY THE 13TH. Yeah. It´s at 7am too. Guessing it wasn´t a hugely popular flight.

Sao Paulo isn´t a particularly attractive city so wandering about to see nice buildings and scenery is pretty pointless. And unless you´re here on a weekend (I´m not) then there isn´t a lot of nightlife to get excited about. So I´ve been seeing a lot of art. Went to the Sao Paulo Museum of Art (MASP) the other day. The MASP is quite small, but has some good impressionist offerings, you know, Manet, Van Gogh, etc. And loads of boring 1200s portraits of rich Dutchmen.

Today went to ´Bienal´, a bi-annual art exibition on from October to December - something like that, I´m not sure (a good thing about these blogs is that you can go back and change things, like in 1984. Crazy). Yeah, it was brilliant. Now I always get a bit panicky when I go to see modern art. You see some rubbish in the corner? It´s art. That step ladder by the door? Don´t touch it, it´s art. That woman just sipping her coffee? Is she an installation?? I just don´t know. She asked me what I was doing walking round her. I didn´t tell her I was searching for the artist/art description plaque. It turns out I´d just wandered into the restaurant. I bought a pastry. 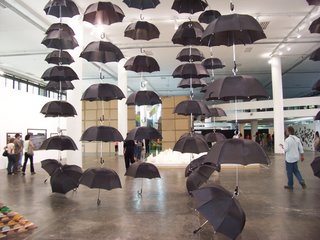 The Bienal is loads of contemporary installations of artists from all over the world housed in a building designed by Niemeyer, the famous architect who designed the capital Brasilia. There´s scultures, films, photography, lots of crazy things. Although some of the artists I thought were ´artists´ rather than artists, you know what I mean? I´m not going to lie, some exhibits I found pretty confusing. A long, stationary shot of a boat on a beach? A film of a cat eating a mouse? I don´t know. There was one short ´film´from an ´artist´ of a woman banging a wall with a hammer. It apparently explored issues of feminine involvement in destruction and creation in a patriachal society. Or something. Anyway.

There was loads of really good stuff I enjoyed. Well I enjoyed all of it but some things grab you. There was a good installation (I say good but I don´t really know) of a guy called Simon Evans, an American artist from California. All his work was pictures made from text. Lot´s of ideas. Intriguing. A bit like that Radiohead album sleeve. If you know it. 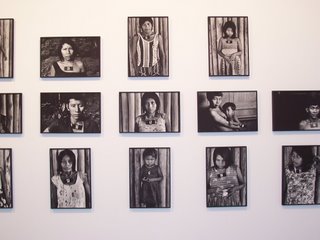 There was a guy who had built a miniture of the White House and had lots of worms living in it, crawling around and looking gross (sub-text, anyone?). Lots of photography of indigenous Brazilians and stuff of Africa, really, you know, rough places where they don´t have a Subway or anything. (Mental question - what do they eat for lunch?).

There was a city made from sugar (scaled down, obviously). An artist´s impression of a future when we all live in bubbles in the sky. Cool. A computer based visual thematic interpretation of a J.G. Ballard novel. Interesting. Hundreads of photos covering walls looking at Brazilian food and culture. Appetising. A Korean installation of a women´s place in modern society based on how to be a Good Daughter, Wise Mother, etc, complete with shackles and clamps on chairs to hold their legs and hands in the right place etiquette-wise. Creepy.

There´s waaaaay more stuff but I can´t think now. It´s been a long day. Again, I´ll fill it in 1984 style later. Right now an Argentinian guy called Juan is cooking for us. I think. I´m hungry, and all I ´ve eaten today is an overpriced ham sandwich. 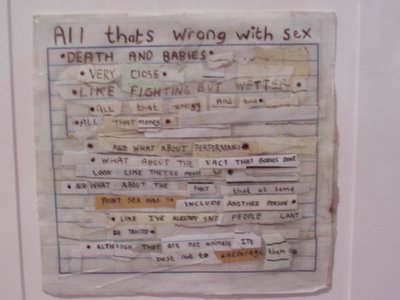 I´ve had enough art for the time being. Tomorrow I shall watch something stupid at the cinema. I went the other day to watch Hollywood´s Scarlett Johanssen pout and strutt about in Brian de Palma´s The Black Dahlia. Or, as it´s known here, Dahlia Negro. Or Negra. I can´t remember. Negro sounds funnier, lets go with that. Yeah, and I liked it. I´ve read on IMDB (the source of all great movie opinion!) a lot of people hated it because it wasn´t like the book, or it was too camp, or not tense, or not like it was advertised in the trailers. But these people, I think, are all wrong. That´s the only explanation.

Anyway, if I can understand any of the titles of the other films on (the only one I know is Click, which has Adam Sandler in it, so no way am I seeing that) I´ll hit the multiplex tomorrow.

And this time I won´t allow The Language Barrier to result in my popcorn being covered in BUTTER.

Hi Andy
Good to see you are up to date (unlike me). However, now in B Aires, so will update with Pantanal pictures soon...
James