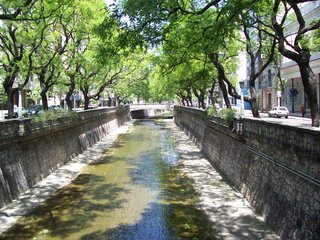 I find myself in the city of Cordoba in the 'central north' of Argentina. Why am I here? I'm not entirely sure. I thought I'd come here before heading up to Salta, a nice northern colonial city. What was I planning to do here? What is my goal? From an overnight bus ride (with Andesmar - we watched Denzel Washington seek REVENGE in Tony Scott's derivative and predictable Man On Fire), I arrive at La Casona hostel to find it's one of those places that nobody really speaks English. I could have gone to several places where they do, but instead I end up here. 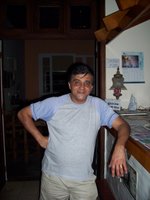 Still, I am met by Willy, who works here and who positively has friendliness seeping out of every pore. Perhaps this is too much friendliness to seep, as he brings me a coffee and talks me through (in Spanish) the entire glossy guide/photo book of Cordoba. What can I say, the guy is proud of his city. It is a shame, then, that I find absolutely nothing of interest to do here. I may be meeting up with the Swedish couple Marcus and Anna. Maybe. I think today will be a 'walk-and-take-photos' day. Maybe I'll go to the cinema. I miss it. Hopefully there will be nothing on by Tony Scott.

My last nights in Hostel Lao in Mendoza were great. I awoke to the sound of "Check out time!" directed into the dorm. I smiled as the others scrambled around to pack their belongings. My smile fades when I realise I have not booked a further night in the hostel and I positively grimace when I discover the hostel is fully, er, full. For the next two days. But fear not, friends, for the garden just happens to contain several comfy hammocks. Yes! Back in the saddle, dear boy. After initial mild trepidation I grew to love the idea so much so that when the guys at Lao (Mike and Celeste, lovely people) offered me a bed after all I was forced to turn it down. 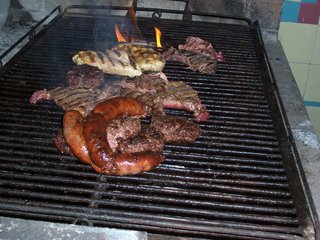 So the last two days I've been sleeping in a hammock and lounging by the pool in 30c+ heat. When it gets too toasty, why you can jump in the pool. Yes, it's a hard life on the road sometimes. Oh, and we also cooked an amazing 'parilla' (bbq) the other night. SO much meat. It was great. We got friends and acquintences from other hostels to come round. Lovely. We had salad and everything. I don't know what was in the salad because the women made it, obviously.
Hostel Lao is definately among the best I've stayed in (La Casona probably won't figure on any such lists). Good hosts, good breakfasts, garden, pool, hammocks, good library. But I feel the key draw of the place is the dog, Astor. I've mentioned him before, but I need to again because I came close to stealing him. He's a big bundle of friendly fur. Pawing at you to pick up his stick and throw it or to play 'dog v man tug of war'. Probably the best dog ever. 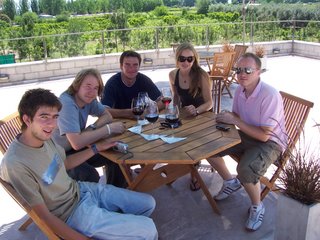 The days preceding this were taken up by wine touring. I capitulated and rented a bike with some of the guys two days after trying walking and bussing around with the Swedes. There was some excellent wine, much mediocre, very little bad. I bought a few bottles over the last few days and now I feel a bit wine-d out, should there be such an expression of alcoholic exhaustion. This cycling was hard work in the sun, especially as we skipped lunch. I hope to visit some vineyards in Chile. Visit Colchagua and the like. We'll see.

This was supposed to be a really brief entry. Oh, well.

I'm progressing rapidly through Marina Lewycka's A Short History of Tractors in Ukrainian, which I now realise is actually different to the title I previously refered to it as. After this I either start Charlie and The Chocolate Factory or something by Kurt Vonneghan. Choices, choices. You just have so much opportunity to read out here. Get up, sit in louge or by pool, and just crack on.

I am just reading something worrying about the 'Road of Death' in Bolivia (search on the BBC website). It's between La Paz and somewhere I've never heard of. I know many people worry about mountain roads in Bolivia. Hopefully I WON'T take this one...

On an additional and completely irrelevant note, I'd like to start calling Scandinavians either 'Scandi's' or 'Navian's'. Which one is better, do you think?
Posted by . at 2:15 pm

I found your blog because you commented on my new Threadless submission.

Anyway, I lived in Argentina for two years (I was in Salta, Tucuman, Santiago del Estero and Jujuy.) I am going to say that the food is great, but the only stuff to do it see pretty stuff in the middle of nowhere. I would kill for some of the food though. (The steak here in the USA just doesn't hold up.) I would recommend cheese and onion empanadas as well.

If you do go to Salta there is a hot dog stand called Bigotes that serves foot long hot dogs with tons of crazy stuff put on them (do not get one with everything on it, you will die!) And there is a really good ice cream shop as well.

If you haven't tried an alfajor from a kiosco, then you are missing out. I think that Tatin Triple is the best brand.

I'm sorry that I can't recommend better stuff. Just so you know I was there as a missionary and I spent most of my time teaching people about my church, so I didn't go to any clubs or anything like that so there could be some great stuff to do in Salta that I just missed out on.

Also, the buses you are riding are the best. I have heard some crazy stuff about buses in Bolivia and Paraguay, you may want to check them out.

This is crazy, I used to live in Cordoba, Argentina. I found you throught threadless too!

Tatin triples are very good, I'll admit to that. :) I however am more patial to the Bon o Bon alfajores. Delish, honestly.

I really liked Salta. Jujuy was rather.... bland. ^_^* I am the BIGGEST fan of Mendoza. I went there on vacation several times while living in Argentina (the best time was when I was with my mother. We bought a bottle of Gancia and some Sprite and got tipsy on the roof of our hotel while observing the Andes mountains).

I went to Argentina on exchange and I cam back a year ago. However, this past summer I did go back down for a few weeks to liven up the party. It was great to see all of my friends and 'family'. I can recommend any number of things for you to do, especially if you went back to Cordoba. Will you be heading up to Cataratas De Iguazu? It's amazing, I'll tell ya that!! Puts ol' Niagra to shame. ;)

Bring me back a pack of Lucky Strikes. I miss the smell. It reminds me of my home there. :)

Well, I hope that we can talk. On threadless my username is steph1890. I also have MSN: Steph1890@aol.com. My AOL/AIM is Steph1890 as well. I'd really like to talk to you and share experiences. I'm so jealous!!