I venture east into the humid tropics of the Amazon basin to see Bolivia's rischest city...and watch lots of dvds.

THE JOURNEY to the city of Santa Cruz was one of the worst trips EVER. Fifteen hours on a rickety old bus bumping up and down the whole way on scary mountain roads. Add to that the prescence of a fat man taking up half my seat and you can see I was not a happy bunny. I was also not happy that I couldn't stay in 'Busch Hostal', which I was recommended by a guy from Santa Cruz. It turned out that the hostal didn't actually exist. Which is a slight problem. 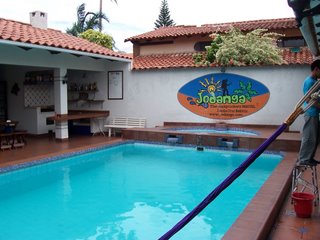 Anyway I ended up at Jodanga Hostal which was very nice so it was all good in the end. Jodanga had a pool and a big TV. Also, it had Adam, a Kiwi with a ton of 'fake' dvds of current films in cinemas. Surprisingly good quality. So during my time in the hostal we watched Scorcese's new movie The Departed and a film called The Illusionist with Ed Norton and Paul Giamatti. It is interesting that The Illusionist is out the same time as The Prestige, starring Christian 'The Professor' Bale and Michael Caine, which is also about illusionists. This happens often it seems. One studio decides to make a film about bugs or volcanoes or astoroids hitting the earth and another thinks 'great ideam we'll do that too.' Well movie/illusion fans I can report that The Prestige is the superior film. It even has REAL magic in. Although they both utilise the magic of cinema, so I guess everyone's a winner.

But what of Santa Cruz? It's a nothng city really. After Sucre it's a complete let down. Lots of beggars, and really humid. Sata Cruz is kind of on the edge of the Amazon basin so it's sticky and sweaty with lots of angry mosquitoes, so the pool in the hostal is a life saver. My left leg has been savaged by blood-sucking insects recently, it looks 'orrible.

Much of the time at Jodanga it was either too hot and humid or too wet to go out so...why not watch some more dvds? I remember watching a bit of an animated Spanish movie about an egg. Think Finding Nemo. But with eggs.

The reason for the wetness is that although it is summer here in South America it is also the rainy season. So every other day there is some kind of tropical downpour. It's cool, but sometimes annoying. 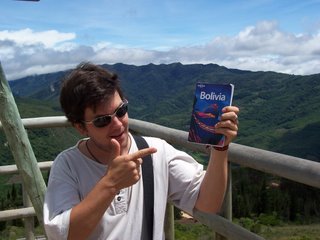 Beat (left), my new travelling buddy, arrived at the hostal a day after me. A couple of interesting points about Beat; he's a Capatin in the Swiss army (he even has a Swiss Army Knife), and he's a full time pant-wearer. To address the first point, in Switzerland they have to do military service despite the fact they haven't had a war in 140 years. They even have a navy. To address the second point he says he doesn't like boxer shorts "because you're not in control of things." I don't know exactly what that means but it amused me greatly. I cannot confirm whether wearing pants in Swtitzerland is compulsory, like the army.

One interesting happening in Santa cruz was a big protest in the main plaza one night. The President Evo Morales has had a law passed that any land not being used that is privately is to be given back to the indigenious people, who make up about half the population. The two main groups here are Quechua and Aymará, although it's very complicated. President Evo is himself an indio. People in Santa Cruz are angry about this law firstly because many people in Santa Cruz are rich and own land and secondly because you need two thirds of the vote to pass the bill and they didn't get it but the law went through anyway. South America, eh? Apparently in Bolivia they have had 40 Presidents in 50 years or something silly like that. I don't know what keeps the country running. Good luck Evo!

It's very strange the contrast of the rich living so closer with the very, very poor. Honestly, so many people here have nothing, living on the streets. But it's an education, a learning experience definately. It puts countries like Argentina into a lot of perspective.
Posted by . at 2:44 pm