A short visit to Australia

Hanging out in Sydney, visiting Will in Newcastle and being in the land of Oz for 'Australia Day'...

I FLEW with LAN from Santiago to Sydney. It was an unremarkable trip. I sat next to a Brazilian called Bruno, who was travelling to Brisbane to study English. The entertainment program was pretty limited. I played 'Who Wants To Be A Millionaire?' seven times but never got above 32,000, damnit! I also watched a film called Little Miss Sunshine which is very good, really charming and funny.

My bags were thoroughly searched when I arrived at Sydney International as I was forced to declare a box of Malteasers. After a close inspection it was decided that these wouldn't devastate the ecosystem and I was able to proceed. 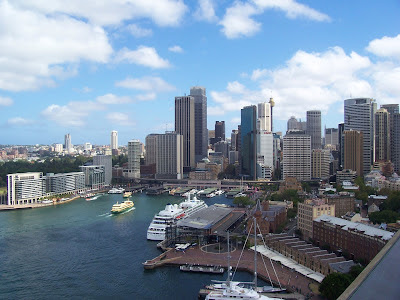 I've been staying in Sydney at the Harbour City Hostel, which is alright although I'm not keen on one of the fellows at reception. The hostel is full of Swedes and Dutch, some kind of company they fly with makes them stay there. Could be full worse nationalities I suppose.

My first day here I was jetlagged like disorientated badger. I realised that 2pm here was about 4am body clock time! But I still managed a walk around Sydney harbour and the Opera House, of course. It's essential. The Opera House looks a bit dirty close up. Still good stuff, though. 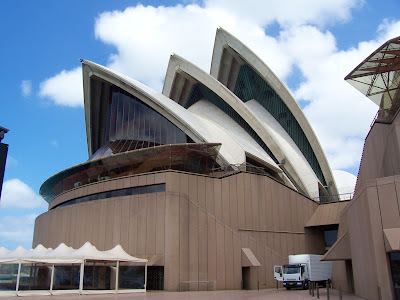 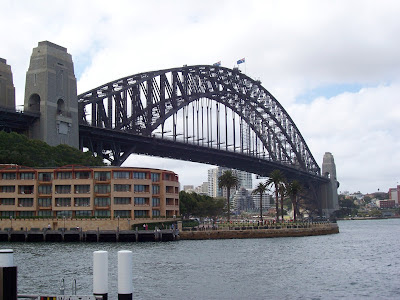 I've taken it pretty easily on the going out front. Everything here is super expensive compared to South America and I don't want to blow the last of my money on clubs that I could virtually go to back home. We went out one night to a terrible place called 'The Gaff' which was apparently THE PLACE TO BE! on that particular evening. Rubbish. Between 9 and 10 there was free beer, which is pretty cool, but not quite that pleasant. If you want to witness man at his most base level forget concentration camps, terrorism, the butchering of baby seals, look for a bar giving away free beer for a limited amount of time. It's like the end of civilization, people clambering over each other for a drop of the precious golden elixir. God help us if it was actually something you needed, like medicine.

Anyway, on this evening while the free beer was (for the time being) flowing, they decided to have a game of strip musical chairs. Lower those eyebrows, for shame! The game consisted of about ten contestents; five guys, five girls. As you know, when the music stops the players find one of the chairs cruelly removed. When you lose though, you're not out, you just have to take off an item of clothing. The guys took to the game with relish. They all got naked pretty quickly. They didn't seem to care if they lost or not. In fact I think there was one naked guy not even in the game. The (sober) girls were a different story. One went down to a bra, but for the most part they just left when the lost a round. If I were single I's say that was dissapointing. Soon I was left staring at a bunch of naked DUDES. Great.

Sydney is hot and a little humid. It's a nice city, very modern and everyone speaks English, which is nice. I keep feeling like saying "hola" or "que tal?" whenever I meet someone. I'm sure I said, "gracias" the other day.

A few days ago I decided to go and meet Will, an Australian I met in Brazil fishing for piranhas. He lives in Newcastle just a couple of hours up the road. I hopped on a train and soon was having lunch with Will and some friends.

Will's family are lovely and they have a very nice, modern house. His 14-year old brother Tom is a typical Aussie lad into his rugby and surfing and such. On my first of two evenings there we had a quiet night, eating barbied salmon steaks, drank some De Bortoli wine we sold at Direct Wines and all watched some Australian Celebrity Poker before retiring to bed, which was a comfy double bed. Nice.

I was in Newcastle on Australia Day, a celebration of all things Aussie. Well, really just an excuse for a party in the sun. It was bizarre, everyone decked out in Australian colours, sports tops, flags, hats, temporary tattoos, some people even had stickers saying 'fair dinkum' and 'you little beaut'. I don't think I've ever felt like such a gringo! Also, Will was the only 'native' on the continent I knew so the afternoon was a bit difficult, but by the evening I was flying, (we'd started drinking beer at 1pm), talking to random folks on the streets, my veins pumping alcohol and enthusiasm around my body. We went to party we were evicted from on account that we didn't know anyone. Fair dinkum!

Some of Will's mates were so Australian think they were on the cusp of being a parody. It was very strange being surrounded by sooooo many Aussies. Too many if you ask me. I usually try and avoid them.

Walking back to Will's to change to get into a club we were accompanied by a very attractive girl. Let's call her Brenda. Brenda had previously gotten romantic with Will's brother (not Tom) and was now being pursued by Will! She thinks he doesn't know about her and his brother. He does. As I stumbled drunkenly on ahead carrying a big bottle full of specially mixed coke and vodka they kept hanging back, stealing intimate embraces in the shadows. Naughty!

By the time we got to the club we were drunk and tired. We stayed for a bit. I danced to some funky songs, then we grabbed a burger and headed back. It was good we got back early as we were up at 8.30am so we could drive to Sydney so Will and his dad could go to a stag party thing. That's a heavy weekend.

So I'm flying to Johannesburg tomorrow. I'd like to do some travelling here but it's a lot more expensive than so much of the rest of the world. You'd have to do some working as you go. Not my usual style. I'm looking forward to South Africa. It's been nearly five years since I've been there. And it's been nearly five months since I last saw Laura.

It's good to get reunited. And now here are some arty pictures of Sydney... 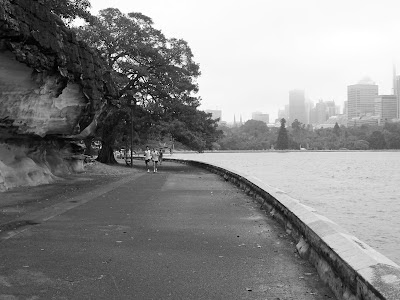 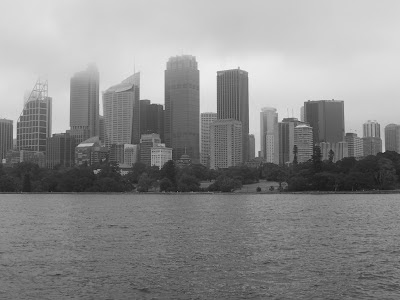