Festivities take place in the small town of Copacabana, which shares it's name with that beach in Rio de Janeiro. 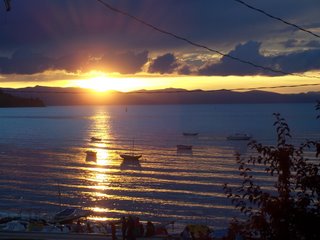 I SPENT Christmas in the small town of Copacabana on the shores of Lake Titicaca in Bolivia. We were actually in a hostal overlooking the lake. Some great sunsets (left). Titicaca means 'grey puma' in the local language. Bolivians crudely claim that out of the grand shared lake, they got the 'Titi' and Peru got the 'caca', which means, well, you can guess what it means. Copacabana is nothing special, but a nice quiet place, a good change from La Paz. But before all that, Beat and I headed to Isla del Sol, or 'Island of the Sun' for four days to check out the place and look at some piles of rocks.

The Incas believed that the first Inca, and also the very sun, moon and stars were born on the island, out of Titicaca Rock (sort of right and below-ish). That's this rock that looks (alledgedly) like a puma, and all these things emerged mysteriously out of it's mouth. Science seems to refute this creationism, but it makes for some very interesting mythology. 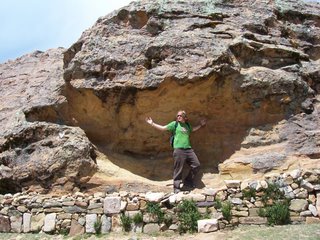 The Incas had a big thing for pumas. In their society (around 1100 - 1550 AD, history fans) the main animals in their mythology were snakes, representing the underworld, pumas representing this world, and condors representing the world above. How clever am I? I could be a professor of mysterious old stuff.

Titicaca Rock is set on a very scenic part of the island. This place must have held a great deal of importance for the Incas. It's a beautiful spot. You can camp on most nice spots on the island for free in fact, or stay in a hostel for little over a quid (as we did. In fact just to mention we stayed in Templo Del Sol Hostel which was run down, but had character. There we met many Germans, one of whom was a priest who had been travelling for 3 years and slapped a bus driver who mistreated his luggage. Incredible. You meet really interesting people travelling). 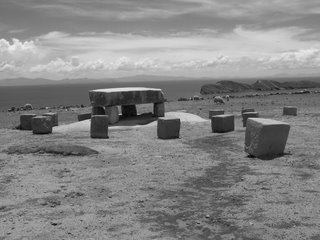 Opposite the 'puma' mouth is the sacrificial stone table where the Incas killed Llamas, and hopefully also people, in honour of the God's. It's a nice structure, very interesting and is also a great picnic table. It reminded me of the death of Aslan in The Lion, The Witch and The Wardrobe. Very sad. But he came back to life! Just like Jesus. Strange...

Down from this place are the main ruins, Chincana (below), I believe they are called. Very impressive. We were alone so we had a nice chance to explore all the nooks and crannies and to really feel the vibe of the place. The rooms, windows and doorways are all still well preserved and laid out. Cool. It was really sunny too, which suits the name of the island. Lots of these ruins have waaaaay too many tourists around so if you get a chance to walk around them on your own it's nice. Beat had to go to the toilet , but we couldn't find the appropriate room so he went outside the ruins. 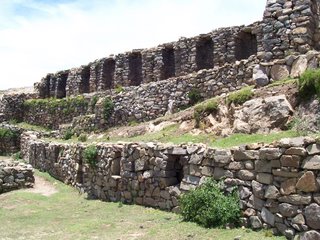 The exact purpose of these ruins is unknown (to us at least), but I believe it may have been some kind of Inca King holiday home. In fact close inspection of the earth on the ground of the ruins indicated the Incas seemed to wear size 8-10 Merrell walking boots. What an advanced society! I await a better theory from historians. Come on Robinson, get your Time Team together and tell me.

Their are some less impressive ruins on the south of the island but we had fun playing with some children, games of 'hide-and-seek' and so forth. The children here are much cuter and quieter than kids back home. I've decided I'm going to adopt an Inca child when I get back and call it something that means 'Sun Child' in an indigenious language. (A South American indegenious language, of course, not English. I don't know what 'Sun Child' is in Cornish). 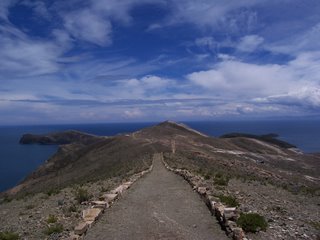 The best bit of the island was walking around. True, carrying 25 kilos up a hill at 4,000 metres nearly gave me a heart attack, but it only takes 4 or 5 hours to walk the entire length of the island, with a smaller 'day' bag. Much walking on this trip, there is.

Life on the island is very different to the mainland. Less poverty, no begging, although everytime you go past some kids with a donkey or llama they instinctively adjust into a tourist friendly pose in front of it. They know exactly what you want. Then after you take the picture they run up to you shouting "pagar mi, pagar mi," ("pay me"). A fun game is to take a picture from reasonably far away, then run away from them. They can't leave their sheep so, haha, I win!

But in all seriousness I really liked the island and it was a definate highlight to the trip. Things are what you make of them and we had a really good time walking around and seeing stuff. 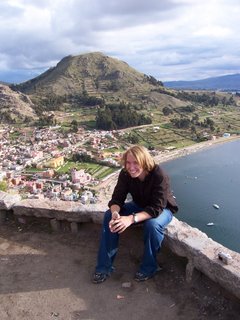 For Christmas I had a rubbish beef type thing in an apparently wizard themed restaurant in Copacabana, where we were waited on by a child. Children do a lot of waiting tables and general working in Bolivia. Bizarre. Children bringing and opening beers for you is an experience I can't imagine much happening in England. Beat had a squashed hamburger. He was very upset.

There are lots of hippies in Copacabana, selling all manner of nick-nacks and trinkits. Not my thing, really, although girls may be interested.

Apart from that what is there to say? We stayed in Copacabana in Hostal Leyenda, with a nice view over the lake where you can get nice shots of the sunset. We climbed up the hill next to the town to see sunset one day but it was a non-event. At least we had wine and cake to enjoy the mood of the late afternoon, and there were some good photo-ops.
Posted by . at 9:15 pm