Puno and the 'floating islands'

After an unexpected and prolonged stay in Bolivia, Beat and I move on along the shore of Lake Titicaca to Peru.

WE HAD no problems crossing the border into Peru. In fact if we hadn't stopped at the border I would never have even noticed. The idegenious peoples of Peru and Bolivia are very similar you see. The main difference is that things are much more expensive in Peru. It's 6 Soles to the pound, rather than 15 Bolivivanos. Outrageous. I'm going to have to think very seriously about spending now. People say something costs 2 soles, and I think that's really cheap, like 2 Bs, but it's not! It's 30p!

We were sad to say goodbye to Bolivia. It had been home for over 5 weeks. Such a fascinating country with the most amazing differences in landscapes and natural beauty and very friendly, colourful and humble people. Of course many try to seize the opportunity to rip you off, but on the whole they are very nice and helpful. It's a country rich in the currency of culture, but sadly poor in the actual currency of money. I hope some day this turns around and that if I ever return there will be less poverty begging and desparation in the streets of all the cities.

But, anyway, I'm in PERU now. The biggest soft drink here is not Coca-Cola but 'Inca Kola', a local traditional soft drink since 1935. It's a fizzy yellow concoction that tastes of bubblegum. It would sell by the freight-load back home if marketed to kids, but it's been bought by Coca-Cola and they won't export it lest it becomes rival to it's main product. So you have to come here to drink it, unless I'm really resourceful and send some home. But let's face it, that won't happen.

We arrived into Puno and stayed in a very weird place called Hostal Europa, which was incredibly recommended in the usually useful Lonely Planet. The theme of the hostal is supposed to be EUROPE, but over the map of Europe hangs flags of USA, Argentina and Brazil. Are Brazil in the E.U.? Also there was a big picture of Los Angeles on the second floor. Crazy.

Basically the place was a hole. A Rat-hole as Beat likes to say. We never even properly checked in, and the woman behind the reception was breastfeeding when we arrived. We got the top floor room in a construction site and the floors were wet. Great. I hate staying in these hostals which are little more than rubbish hotels, not 'hostels' at all. 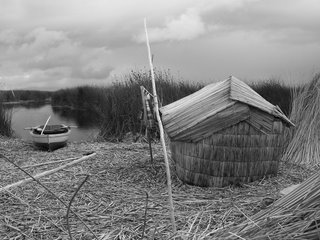 But Puno (which is also a pretty rubbish place) was just a stepping stone for a trip to the famous floating islands of the Uros (left). There are about 40 different floating islands on Lake Titicaca made out of reeds that grow up out of the water. The people there eat the reeds as well. It was strange walking on the islands. They really do float and as you step on the reeds sometimes water seems up. They have to constanly replace the reeds as they rot away. The people on the island have lived there for hundreds of years, originally as a way of escaping from the aggressive Incas, who presumably couldn't build boats.

The people of the Uros can build boats (below), great big reed boats with puma heads on the front. It takes 7 men a month to build a boat big enough to sail 30-40 people, stat fans. 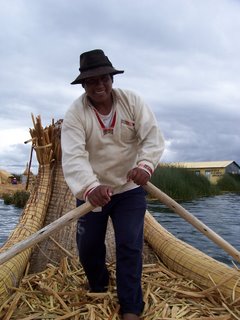 The islands themselves were, I have to say, not what I'd expected. Although the experience was interesting to witness these islands and to get a grip on how the people lived, the whole thing has become shockingly over-touristic to the point where it was a bit disapointing. Almost all the people on the islands have stalls trying to sell you things like cloths and models for a not-very-cheap-price. They almost harass you to buy stuff. I'd rather have paid more for the priviledge of coming onto the island and seeing them live their lives rather than the kind of over commercialisation that we found. There are some islands, we where told, that don't allow tourists on. Good for them.

After that we stayed the night on the island of Amantani, which was a more orthodox island of 5,000 inhabitants that did not float. Just to clarify, it is the island that didn't float, I imagine most of the inhabitants would float, although I didn't empirically test this hypothesis.

We were put into groups of 2-4 people and assigned a family to stay with, who made us lunch, dinner and breakfast. Very friendly people. They only spoke Quechua, a local language, and a bit of Spanish which made conversation a little difficult, but we had a beer with them and had a nice chat. Our host mother spoke no Spanish so drank very quickly. Not a cheap date. 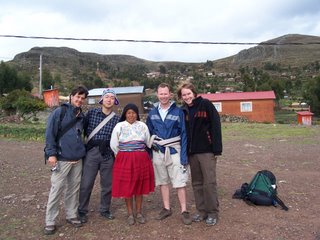 In our group (left)was myself, Beat, a Japanese guy called something like Mokita, and a guy from London called Nick. But the thing was, Nick had family in the south-west...and was a Plymouth Argyle fan! As if to prove it he had a blue Argyle t-shirt with the club crest on! Fantastic. I'd almost given up on discussing the shortcomings of Nick Chadwick while in South America. I tried with a Brazilian once but he just replied, ironically, "Who? Maradonna?" I said, "No, Nick Chadwick." He said, "I don't know this Neil Chadweh, I know Maradonna. Good player. Too many drugs." And that was that.

In the evening on the island we were made to dress in local dress (for men wool ponchos and silly hats were the fashion) and dance with the locals. It was cringeworthily touristic, if that is in fact a real phrase, but quite fun. I mastered the basic if slightly repetitive dance moves quickly and blended into the local scene.

The next day we headed to the island of Tequile, where the people speak only Aymara, another local language. Interestingly, there the man must learn to sew or he cannot get a wife. He must knit her 20 skirts or something before marriage. Also, the men wear funny hats that indicate they are single, kind like at a traffic light party in a student union.

On the way to the island, we were struck by bad seas. The boat was tossing around like a boat in bad seas. Now, I haven't got a good stomach for these things, but I managed to keep my breakfast down. The same could not be said of some other passengers. One girl went outside straight away, another had to be carried out. A French woman of about 60 threw up on herslf inside the boat! One by one we were dropping like flies. People even threw up after they got off the boat. It was a proper horror show.

On the way back to Puno I asked Bruno if I could drive the boat. The driver was on deck having his lunch. Bruno shrugged and said, "ok." He sat down, put on his headphones and closed his eyes. So I drove the boat for ten minutes, which must conflict with some kind of insurance policies or SOMETHING. It was a good ten minutes. Then we got too close to another boat and the driver came back in to take over. But he was a rubbish driver. He kept falling asleep.

After the tour we were signed off by our enigmatic guide Bruno; "My friends, for two days we have been friends, you have asked me lots of questions. Now the tour is over and we are not friends." Quite. 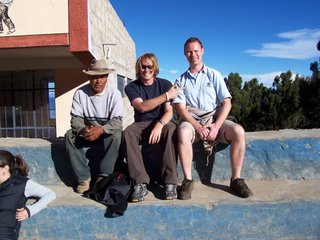 We stayed another day in the rat-hole of Hostal Europa in Puno. Just in case you ever go there is a good bar called something like 'Kamazariky' in Puno. Apart from that, hop around the islands and then get the hell out.

In our case we have headed to Cuzco, the former capital of the Inca Empire and now the biggest tourist city in South America after Rio, possibly. We are ther for the new year and then we will head out to see some sights in the 'Sacred Valley' and possibly even Macchupicchu, the BIGGEST sight in South America.

Happy New Year! The picture above is me and Nick with our host 'father' on Amantani. He looks happy.
Posted by . at 10:08 pm