The New Year's festivities are spent in one of the tourist hotspot of South America...

PARTY HOSTELS are pretty hit-and-miss. 'Loki' is definately a party hostel and as such is full of a LOT of people that ordinarily I wouldn't rub shoulders with. It has a lot of folks that are a little too cool for school to be honest, and as such a lot of people aren't the friendliest. Reminds me of being in a pretentious club back home. Thankfully Loki is HUGE and well over 150 people were around for new year's eve, so lot's of nice people to chat to as well. 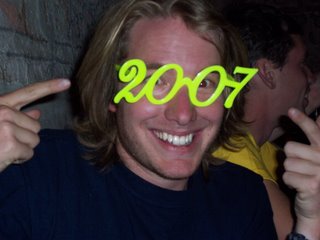 I spent most of the evening with an English brother and sister combo called Henry and Amber. I met them on the island hopping trip on Lake Titicaca. Nice people. Beat was preoccupied, having met up with a Peruvian woman that he had been 'communicating' with for several months over the internet. They are now very much in love and are going to marry and have loads of Inca children. Probably. She is called Maribel and lives in Lima. She flew all the way to Cuzco for new year, just to see him. Pretty desperate if you ask me. Still, true love, eh? It's marvilous.

The new year's eve party was held in the hostel. Full to the brim like brimful of asha, the party rocked untill about 11.30, when everyone dissapeared to the main city centre Plaza to celebrate the arrival of 2007. It was slightly confusing as there was no definable countdown. Instead, around 12-ish everyone just decided it was pretty much new year and started throwing fireworks at each other. It was madness, so dangerous. Explosions everywhere. Memories of 'Nam started flooding back, which was weird because I've never been. Not even on holiday. I blame the movies for these quasi-PTSD feelings. Damn you messers Stone and Ford Coppola! 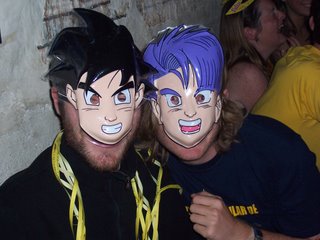 After the 'celebrations' we headed back to the hostel where drinking and chatting was engaged in untill I felt it was my bedtime around half past three, having had my fun and feeling plum tuckered. I haven't actually been feeling too brillant recently. The stomach again. Still, 3.30 is a reasonable time to retire, right? I really need a holiday to get better. Recharge. Buses, hostels, excursions, different cultures, languages; these things are all very stressful. I need a break. I don't know where I'll go but it must be private and quiet.

Speaking of entertainment, on the book front I recently read Leviathan by Paul Auster, whose imagination is so vast his main character is A WRITER CALLED PAUL AARON. Way to go Auster. Also I read Indecision by Benjamin Kunkel. It's a '28-year old coming of age' type thing. Very enjoyable. The main character is not called Benajamin, but Dwight. See, it's called FICTION Auster!

I now have a strange mixed bag of books to read; Lolita, The Best Detective Stories of Agatha Christie, and Endurance: The True Incredible Adventure (which is the story of Ernest Shackleton's heroic trip across Antarctica. I'm actually quite looking forward to it. In fact I may read it first!). 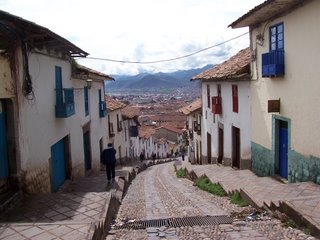 Hmmm, what about something cultural...let's see, Cuzco was the capital of the Inca empire, which stretched, well, all over the shop. Now it's a party/tourist city where everyone is trying to sell you something; "Bus tickets?...Machupicchu Tour?...Marijuana?..." Everything is for sale. EVERYTHING.

Cuzco (right) has some nice Inca walls and restaurants and stuff. It's a South American tourist hotspot and prices reflect that. The competition between bars is so fierce that it's happy hour almost every hour. Some places offer 3 or even 4 drinks for the price of one to get you in. Incredible.

It's a strange city. I don't know if I like it. Sometimes I just want people to leave me alone and not try to sell me a tour or massage or anything. It's annoying.

This is really awesome and beautiful.
Thank for this sharing.
New Year 2019 diaries