Macchupicchu and The Sacred Valley

At long last Beat and I get around to visiting THE sight of South America. Along the way we see a few other bunches of rocks and get annoyed with a tour guide called Reuben.

GUIDES. I really hate them. Guided tours too. You feel like such an idiot and almost always realise you could have done things yourself. I feel this way because of one man; Reuben. We booked a two-day trip around some sights in the 'Sacred Valley' featuring many different Inca sites, and finishing with Macchupicchu.

Don't get me wrong, I do lot's of indie travelling too, but for ease we decided to take up a tour offer this time.

First of all the tour was an hour late kicking off, and Reuben kept rushing us around. "You can have 20 minutes at this market." Twenty minutes! Around a market that you could have killed an afternoon in. Estupido. 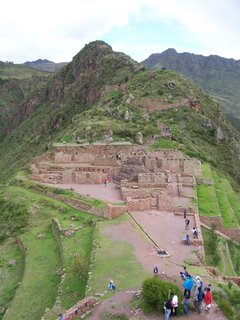 Just above Cuzco we drove past a site called Sacsayhuaman, which means 'satisfied falcon' in Quechua. But when pronounced it sounds fantastically like 'Sexy Woman'! Ironically, no women sexy or otherwise would have lived there as it was an Inca fortress housing up to 5,000 warriors. We didn't stop.

The trip was worth it, but in spite of the guide rather than because of him. We visited the Inca ruins at the sites of Pisac (left) and Ollantaytambo, both which were very cool, but it was too crowded going at tourist o'clock. It was just...argghhh. Stupid tours. Ten minutes later lots of tourists dissapear, you can get good pictures, but by then 'Reuban Group' has moved on. It's quite frustrating.

Pisac is known for it's many terraces which the Incas used for agriculture, keeping them in full supply of corn and other foodstuffs. There's also evidence of living quarters, temples, sanitation and a water supply. At one site there is a circular ampitheatre type land structure, where apparently on each level crops had their own micro-climate. Clever people. As we ascended the path a delicate-looking child in traditional clothes played haunting pan-pipe music of the Andes to earn some pocket money. He needed practise. Lots. 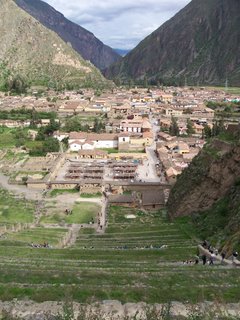 Ollantaytambo (right & below) was a fortress and spiritual centre for the Incas. It sits high above a market town and was one of the only places where the Incas won a battle against the Spanish, firing down arrows, stones and (maybe) potatoes to thwart the advancing cavalry. Would have been fun to watch. Apart from all the death.

But then the Spanairds came back with more men and this time won - boo, forcing the last Inca king Manco Inca to retreat to the jungle in Vilcabamba. The Spanairds tracked him down and killed him 8 years later. I've really got into the Inca history, especially the decline, which is the most interesting bit of any society. Just look at Hitler. When I get back I'm definately going to get a big book. A glossy one full of pictures. Of the Incas, not Hitler.

Reuben rushed us round the site slicing our way through hordes of tourists, telling us how heavy all the stones were. He was an expert on the weight of stones and the altitude. Everywhere we went, he knew if it was 2, 897m or 3, 356m above sea level or if a stone weighed 15 or 25 tonnes. Of course he could have been making it up, we wouldn't know. 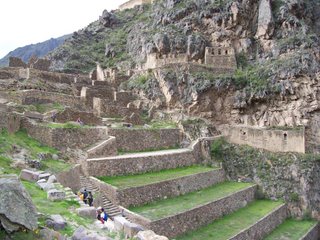 But he didn't tell us enough of the context of the places. He didn't set the scene, put us in their place. I'm a man - I want to know about BATTLES and WAR. Rubbish Reuben.

We then hung around for a few hours and caught the train to Aguas Calientes, a town deep down in the mountains and a sort of base camp for excursions to Macchupicchu. I felt a bit like Michael Palin. Trains are definately more comfortable than buses. Less bus, less fuss. Good slogan.

Agauas Calientes is quite petite and probably wouldn't be there if it wasn't for the ruins above. We stayed the night in Inkatambo hotel - everything there is called 'Inka-something' - and the next day got up at 5am to get up to the ruins early. After a half-hour bus ride we were in the ruins by 6.30am after paying a fairly extortionate price of $38 to get in. Well it is Macchupicchu. And we were there! Great, except one problem - it was so misty you couldn't see anything. And it was raining. In fact it was the worst weather possible! 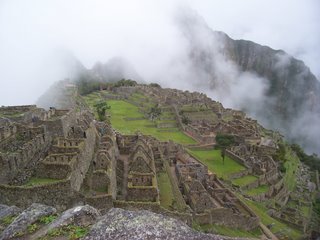 Things cleared but never enough for a good chance to get the classic Macchupicchu shot (right) overlooking the site with the towering Huayna Picchu in the background. Shame. Still, looks pretty cool.

We ditched our large tour group early on as the thought of following a grown woman waving a purple flag shouting "Ana Celia's group!" was just too much after Reuben the day before.

Finally we had what the Scottish wanted in 1147 - freedom. We wandered around in the rain exploring the nooks and crannies of the site on our own, although armed with a guide book. And if you want toknow more just hang around untill a tour group arrives and listen to the guide. It's a bunch of rocks of course, nothing happens. But probably it's the best bunch of rocks there is. The thing that makes the site so good is that it is so complete. Throw a roof on most of the houses and people could just move back in. 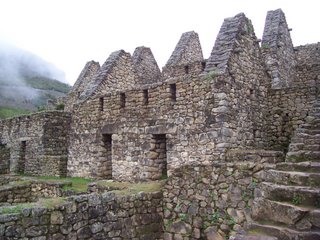 It is thought that the city was abandoned and never discovered by the Spanish. There is no mention of it in Inca history or Spanish journals. So it lay forgotten by everyone bar a few Quechuas untill an American called Hiram Bingham (his name is everywhere) found it in 1911, thinking it to be the site of Vilcabamba which I mentioned earlier. So just like Chris Colombus, a lost explorer got lucky and hit the jackpot.

A bit like Stonehenge, no-one really knows what Macchupicchu was all about. Spiritual centre? Royal retreat? A last ditch attempt to preserve the culture and hide from the Spanish? Some believe the site was abandoned before the Spanish arrived and others that it was a even pre-Inca society. So far no-one thinks it was an alien landing site. Yet.

But with the impressive stonework and layout of the site it must have been very important and would have looked really awesome in it's day. On both sides it has spectacular views down into the Urabamba valley. Along the edges of the site are many steeped terraces which were used for agriculture. Along with animals like sheep, llamas and alpacas, the people who lived here would have been virtually self-sufficient. Which begs the question; if they were never discovered by the Spanish, why did the people of Macchupichu abandon the city?
I suppose we'll never know. Macchupicchu has been called 'The Lost City of The Incas'. From the HUGE amounts of people that really begin to arrive from about 10am onwards, you can be absolutely certain it's been found. Soon the site gets quite crowded in most of the good viewing points and it's almost impossible to take a photo whithout another person in it. 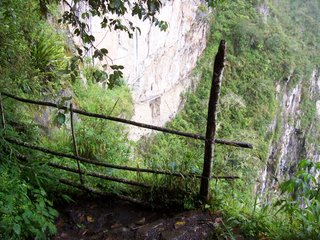 So later in the morning Beat and I went for a walk along the steep narrow path to see the cliff-hugging Inca bridge (right), which you can no longer cross owing to the fact that it is too perilous, a fact supported by the fate of the last person who tried to walk across it. Which was death.

About midday we decided we had been in the 'lost' city long enough and headed down the mountain. I think 5 or 6 hours is enough to spend at any archeological site (unless you are an archeologist, in which case I recommend staying longer). People were heading back in and the day cleared to be bright and sunny in the afternoon, but we were halfway down the mountain and couldn't be bothered to go back to take one or two better photos. 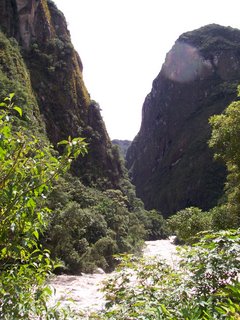 In fact on the walk down we took some lovely photos of the Urubamba valley (left).

We visited the town's hot springs, which were exceedingly hot, and stayed the night in Aguas Calientes before heading back early this morning (5.45am!) to Cuzco via train (Palin again) and taxi.

I am now back at Loki and am wondering where to go. To Pisco, home of pisco? But I don't like pisco. Do I? Or I could go to Arequipa. I just don't know. I need to relax. Think. Maybe get a massage.

Anyway, Macchupicchu was good, I enjoyed it. People say it's a must but if you have zero interest in ruins and history it's an expensive trip up a hill. Beat was less impressed than I. He gave it "5 or 6 out of 10." I don't know how he arrived at thatrating but he's from the contintent so I don't always understand him.

Anyway, now I have to go as we bought a copy of Rocky VI (that's six) from the market and we need to watch it.

Rocky's out of retirement for one last fight. Probably against arthritis.
Posted by . at 7:56 pm