A few hiccups over transport and I find myself in the cute (if slightly smelly) desert oasis of Huacachina. 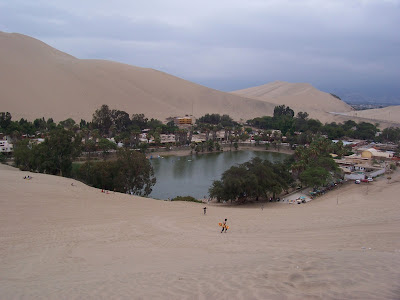 ONE DAY on my own following my separation from Beat and already I have run into trouble. I caught the 6pm bus from Cuzco intending to get off in the town of Ica. But there was no stop in Ica and I didn't know where it was, and fatally didn't ask anyone. Well, I was tired. It was a long journey and I didn't sleep that much.

So I missed Ica and went straight onto Lima, an additional four hours on top of the 15 I was supposed to travel. Lima has a KFC and Pizza Hut, I noticed. But Lima was not where I wanted to be. So I hopped onto another bus and hurtled four hours back down south along the Pacific Ocean. And this time got out at the right time. An uneccessary extra EIGHT hours of travelling spent eventually getting to Ica. Nightmare.

But I had nothing elseto do, and besides, I was on Cruz Del Sur, the best bus company in Peru, and perhaps the world (they have their own private terminals!) Security is tight, too. They video you as you get on the bus. For security.

On my intended 15 hour trip (or actually 19 hours as we've nowestablished) we watched no less than five movies, which were curiously all English language films dubbed into Spanish and subtitled in English. Confusing. Among our celluloid treats were Robert Redford's enjoyable melodrama An Unfinished Life (which has a bear in it that mauls Morgan Freeman, but by the end of the movie he's ok with it), Al Pacino playing the lovable meat-seeking Jew Shylock in The Merchant Of Venice and Tom Cruise battling his (fictional) alien demons in War Of The Worlds.

And hey, it wasn't all bad missing my stop, I got to watch Cheaper By The Dozen. TWO!

So I arrived in Ica. But I didn't want to go there either! I caught a taxi the 6km to the little desert town of Huacachina (pronounced "whacka-cheena"). Here I've just been chilling out. Reading in a hammock or by the little lagoon. My room is/was a bit of a hole, with ants crawling up the wall and everything, but I just needed somewhere private and quiet to rest. Well, at least it was private.

You can go on dune buggies here and sand surf, which of course I have not done. But you can do it. If you want.

I have been doing to much travelling in the last few weeks. Too many cities. Stress. Needed to rest. So instead of engaging in adventure I have been reading about it. In particular I refere to Endurance, Sir Ernest Shackleton's ill-fated attempt to cross the whole continent of Antarctica in 1914. He would have been the first. That's why he wanted to do it, obviously.

Well, what happened was old Ernie's ship, The Endurance, got stuck in ice and drifted in said ice for months before enduring no more. It was crushed and finally sank. What's an explorer and crew to do in such a predicament? Well, they lived on the ice for ages. And ages. Then they sailed to different islands to try and survive in what you can imagine was not pleasant weather. They lived on seal meat, some kind of dough balls and instant tea and coffee. INSTANT! Needless to say, it was not a jolly holiday. In fact at one point they had to shoot their dogs and eat them which, come to think of it, is probably more horrible than having to drink instant coffee, actually. But no-one died! And it could have been worse. They could have been in the fields of the Somme in France, say. I'd personally rather live on the ice floe!

But seriously, they endured an awful lot. It was two full years before they were rescued. Two years! Thankfully now you can go on safer trips to Antarctica and they don't make you kill your own penguins and seals, which I think would put tourists off somewhat.

Anyway, Huacachina is nice. But they need to employ some people to clean up litter.It smells of nasty stuff at some points by the Lagoon, distracting me from Shackleton. Photos are needed to fully emphasise the place, but if you 'Google-image it' you might find some nice pictures. Just imagine me there.

I am now reading Nabokov's Lolita, which is actually a very good book, surprisingly funny and enjoyable, if it does drag over the second half somewhat.

It is now at times like this when I have said everything I meant to say that various important questions come to mind, such as what is my Swiss amigo Beat doing right now? Who will Argyle sign in the transfer window? And what are Tom Hanks best films? With this latter matter I believe there are two schools of thought. Some prefer his earlier light-hearted works such as Turner and Hooch, The Money Pit, Splash, etc. Others prefere altogether 'worthier' fare, such as the Springsteen soundtracked Philadelphia, Forrest Gump or Road to Perdition. In my opinion Mr Hank's best films are probably Big, a coming-of-age comedy, and Saving Private Ryan, an, if you will, coming-of-death drama.

And that is all I have to say about that, to quote Mr Gump. Tonight I'm bussing to Arequipa, 10-12 hours south of here. 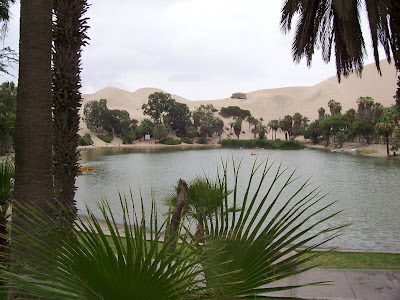