Arequipa and the Colca Canyon

Trekking through canyons, eating guinea pig and spying on nuns...

IT'S BEEN a busy time doing touristy stuff in Arequipa (pronounced a-reh-kee-pa). The trip here was a comfy, uneventful overnight ride from Ica. Arequipa is a nice city, a change of pace a little from Cuzco. You certainly get hassled less. I was here to see a couple of city attractions and do a little excursioning, if in fact that is a word.

There's a big famous monastary that's 400 years old that was very nice and yielded some lovely colourful pictures. Different areas are painted their own individual colours and there are flowers and orange trees and it was really lovely and I can feel myself turning into a girl. Urghh! Er, football, war, bbqs, poker, cigars, Sparticus!...right that's better.

The Monastary is called Santa Catalina and is made from the rock type 'sillar', if indeed anyone cares about such a thing. I clearly don't, because I'm a ruddy man! For many years rich families in Spain paid doweries so their daughters could go and live there, in relative luxury with servants and such. Basically they lived it up in a fashion they were accustomed to, I think. Then a strict nun, like the old girl from Sister Act, came in and straighted things out.

The Monastary first opened up to the public in 1970 and the nuns there now live in a newer part of the complex. The whole site is huge, the siz e of a city block. It even has it's own street names and stuff. It was really interesting and I even spied a few nuns hanging out, looking kinds holy. I did enjoy the experience of walking around. Places like that have a really peaceful, relaxed feel to them, still a bit removed from the outside world. Check out the pictures below. I think they're pretty good. 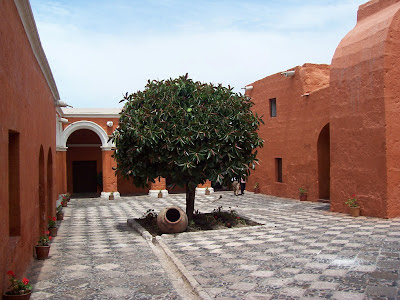 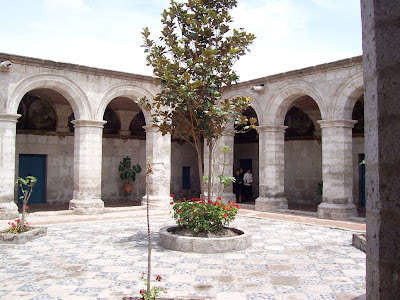 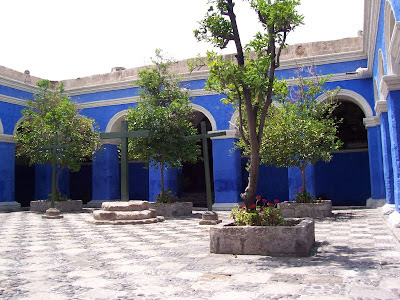 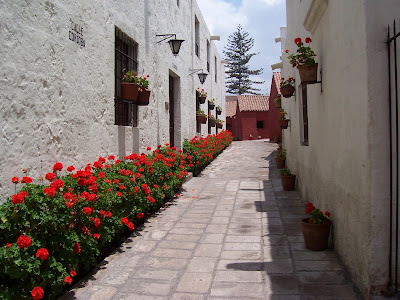 After that I went to the Museum (whose name I momentarily forgot) which is all about Inca sacrifices. They put on a National Geograhic video, give you a tour showing artifacts like clothes, trinkets and even a mummy, frozen in a -20 degree chamber under low light. It's creepy but tastefully done.

The Inca's used to offer the purest children as sacrifices to appease the mountain Gods and maintain the blance of nature, thus insuring a good crop harvest. Which is rubbish, obviously, but they believed it. And after young children were chosen they made a journey from the Inca capital, Cuzco, to the highest mountains (about 6,500 metres high!) in order to carry out the sacrifice. It took months to get there. Imagine the dedication. Incredible.

Once there, they gave the children a seditive then bashed them over the head with some rock to kill them, which is, ironically, not very bashful. Then they buried the kids in graves with all the other gifts and trinkets. Because of avalanches and the temperature at this altitude (which is a bit nippy) the bodies were frozen and preserved for scientists/gravediggers to discover. Fascinating stuff. They even have the coat type cape thing of one of the mummies, Juanita, that was still covered in blood from where they struck the fatal blow. Scary.

Being sacrificed was kind of like an honour, as only the purest and most beautiful children were chosen. It was thought you would go straight up into the heavens and become a god of sorts yourself. If you believed such things, of course. Otherwise I imagine you'd be pretty scared.

It is though there are still many sacrificial burial sites out there waiting to be discovered/plundered.

So Monastaries and museums were visited in Arequipa and I felt very cultured. The other big thing in/around Arequipa was a three day trek in the Colca Canyon, which is this really big canyon. It's famous too. Our guide was a very interesting guide called Luis. We were also joined by a Dutchman, a Scotch girl, and a couple who were from Austria and Germany. I wish them luck, although alliances between those countries have not suceeded in the past. 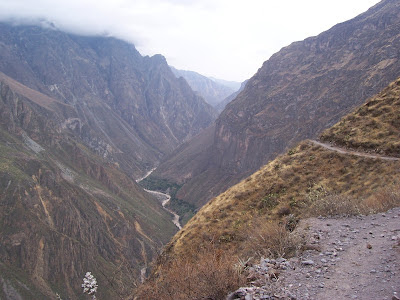 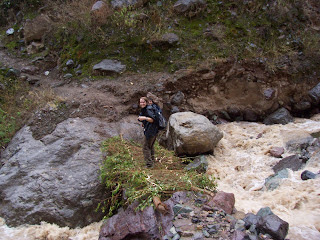 Anyway, twas a good group. The main purpose of the trip was to see the small communities that live in the canyon, to see who their lives differ from those in the big cities, etc. The walk down into the canyn took three hours, then a further hour and a half walking to a village along some paths and across a stream, crossing a makeshift bridge built by the villagers. There was a man from the village to meet us with a mule to carry one person, which I thought was a nice touch.

So it took us 4-5 hours to get down into the canyon. I noticed that the family we stayed with had a really big fridge in their kitchen. You cannot access the canyon by car. I was confused. Apparently it took the family SIX DAYS to bring the fridge from the nearest big town, Cabanaconde. I think after I few days of carrying that thing i'd be like, "you know what guys, I don't mind if my beer gets warm, let's just leave it."

But they didn't leave it, and that evening we enjoyed lovely cold Coca-Cola! Good job!

There was a lot of walking on that trip. The company we went with, 'Land Adventures', promised that they 'go the extra mile'. The German guy said, "I fail to see how that is an advantage." Quite.

The next day we were up for a pancake breafast at 7am, then we walked to the local museum a lovely woman called Doris had set up. The museum showcased local culture and was really interesting, especially all the examples of natural medicines. It's crazy, they spread melted donkey fat on broken bones and for birth pain they wrap a LIVE snake around the woman's abdomen. Apparently it helps.

After the museum, (where Doris let us try cactus fruit which is nice but has lots of seeds in) we walked for a few more hours to a little oasis in the driest part of the canyon where we had a dip in a nice pool and ate Luis' spaghetti. 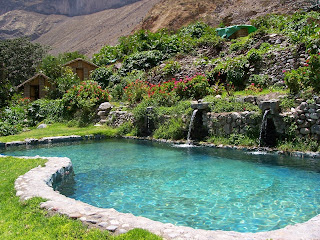 We then endured one of the hardest walks I've ever done - 1,200 metres up and out of the canyon. It only took two and a half hours or so but it very nearly killed me. It was so...so steep! And it started raining at three o'clock, as it does every day in the canyon in the wet season. It was an arduous challenge, and I can't say I particularly enjoyed that bit. My legs at times felt like they just wouldn't go anymore! But I did it. I made it. We all made it. The Scotch girl a little behind everyone else. 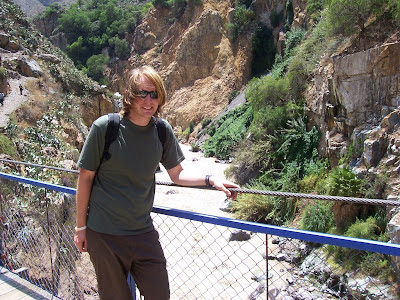 The next morning we went to see some condors, which are famous for their role in Inca mythology. They are massive creatures and one of only three species of bird that can fly without flapping their wings, avian fans. However, they are also vultures, too slow to catch any prey or anything, so most of the time they sit around waiting for animals/tourists to die so they can eat them. In fact to keep the birds in the canyon, the villagers, still to this day, sacrifice a donkey every month for the condors. Poor donkey, but it's tradition so what can you do?

The rest of the trip passed without incident. Luis told us about a quasi-religious novel/spiritual history book he was going to write and we went for a swim in some local hot springs.

Back in Arequipa we all went our separate ways. I was staying in Bothy Hostel with Martin the Dutchman. He had an evening bus and I went out for dinner with three guys from New Zealand; Will, Andrew and Peter. We decided that we should try Guinea pig, which is a Peruvian delicacy. After making numerous jokes about what expression the guinea pig might have we were a little shocked to see that the animal was served pretty much intact, with it's head still attached and a full compliment of teeth, ears, eyes and whiskers. Yum!

We tucked in. It's nice, slightly sweet and the skin was reminiscent of fried chicken. Not a lot of meat on the bones, though. My guinea looked up at me with what I interpreted as an expression of bewilderment. I enjoyed it, but I don't think I'd go for another one.

We left the heads, but kids kept trying to sell us things (gum, chocolate, ciggarettes) so we managed to dispose of the heads by offering them to the working steet children. Friends, they looked at us as if we were mad, as if we were getting rid of the best part of the pig. We even tried bargaining a chocolate bar for the price of a guinea pig head. It was no deal, however.

Following dinner we had a drink in a nice bar where I met up with a nice American guy called Matt who I had seen in Loki in Cuzco a week previously. By chance I had passed him in the main square. His friend had had her camera stolen and was upset but these things happen and you just gotta deal with it I guess. I haven't had anything stolen so far (although I have lost my mobile phone) but I think it's just a matter of time before I get something nicked. I might pay someone to rob me, just to get it over with and thus embrace the law of averages on my own terms.
Maybe.
Posted by . at 4:40 pm