The journey to Santiago

OK. THE simplest way is just to say it all. I left Arequipa at 5.15am on a bus bound for Tacna, on the Peru/Chile border. I got there about midday-ish, took a collectivo taxi through the border control with a Chilean naval oficer who had lived in Croyden (so bizarre) and spent the night in a depressing hostel in Arica, which is actually a pretty nice looking city. What followed the next day was a period of my life that I will never get back - a 32-hour bus journey.

We left around 11am one day and arrived in Santiago around 6pm the next day. Quite a journey. I slept about 4 hours during the whole time, owing to the crying baby in the seat next to me. Also it was hot. Really hot. The south of Peru and north of Chile is really just a desert, albeit a nitrate rich desert that the two countries and Bolivia fought over during the War of the Pacific (1879-1883).

Yes, it was a long trip, my personal best so far, although I know people who have made 40-45 hour bus rides so I shouldn't complain.

I finished Elmore Leonard's LaBrava, which was entertaining, and read THE WHOLE of Roddy Doyle's novel A Star Called Henry which is really very good and you should read it. I've never read a whole novel on a bus trip before. Afterwards I felt very special.

When you arrive after a journey like that you feel really weird, like you've been spred too thinly over some toast. Or something.

But, anyway, I'm now in Santiago, taking it easy at Hostel de Sammy, which is one of my favourite hostels I've stayed at. I've been to see the National Museum of Art but apart from that I really haven't done anything much at all in Santiago. It's not got a good reputation amongst travellers but I like the feel of the place. It's exotic, yet kind of European and familiar. The hostel is near some universities. It feels vibrant. And the other day I stood watching old men play chess in the main square. They finish games in ten minutes - no lie.

So I like this place despite not having seen much of it. But with all the trekking, tripping, bussing and fussing it's nice to really relax for a bit. Stay in the same place for a while. It's a good place. They have cereal for breakfast, a real treat.

And the weather here is great! Three days of sun and wrath. No rain! Fantastic. It's put me in a good mood. You can't help it, the sun does it to you. It's summer!

Charles, the interesting owner of Hostel de Sammy, taught me how to play Chilean pool. It's slightly more complicated than regular pool but I think I like it. You basically arrange all the balls around the table cushions and must pot them in order. You then are awarded the value of that ball. If you knock in a higher value ball after first hitting the current number, you get the value of that ball! But if you foul you lose the points of the ball were trying to hit or the ball you hit instead! Interesting, no? It really rewards people good at setting up or escaping from snookers. At the end you subtract your negative points from your positive ones to get a total, just like with the gold and silver tickets inside the crystal dome on The Crystal Maze! Except in Chilean pool you don't have to wear shell-suits to play. I will teach it to anyone interested when I return.

It's a nice crowd at Sammy. I'm mostly hanging with a crowd of Scandi's, Ozzies and English, for which I make no apology. We hang out A LOT in the hostel, playing pool, watching movies and drinking tea (which is free, hurray!) 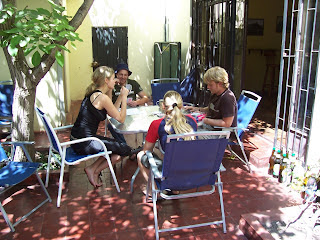 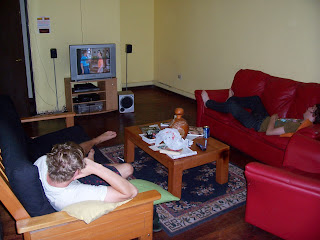 I'm in a (nice) dorm with a Japanese guy called Rich. He can do karate, so I don't wanna get on the wrong side of him. He lives in Los Angeles and has sparred with Dolf Lugdren. Fantastic! He was offered $500 an hour to do some martial arts training for X-Men 3, but said he didn't do it because he didn't have the time. Fool! Below is a picture of me doing the Karate Kid 'crane' move on him. Take that! 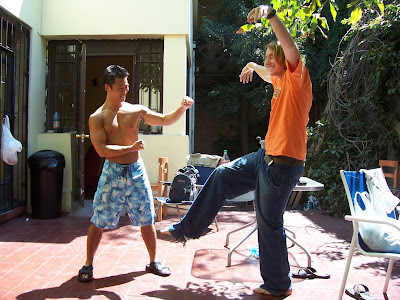 Sadly the X-Box containing the movies is now broken, a tragic day for all but we get by...one day at a time, y'know?

Another sad fact is that I've finally cracked after a run in with a rubbish book exchange and am now reading....Dan Brown's The Da Vinci Code! Noooooooooooooooooooooooooooo! Don't look like that! Don't! I've only just started and it seems fine. It's trashy, obviously. And prosaic. Lacks any kind of interesting character development. And at times it reads like an overly enthusiastic history homework assignment as if Dan is saying "look here, look how much I know about art and history and the geographical locations of Paris. I am clearly very clever."

But apart from that I'm sure it'll be great. Maybe even "brilliant!" as it says on the cover. By someone I've never heard of. And never will.

Yesterday I went to the Australian Embassy to get a visa. They gave me an Electronic Travel Authority thing, which is the same but no sticker in the passport - boo! Travelling is becoming less fun, soon there will be no stamps, no passports, just eys scans and DNA testing...if Blair gets his way!

So today is my last full day in South America. I fly to Sydney for a week's stay tommorrow night at 11.10pm. I'm looking forward to it. I love flying. I like the take-off when you suddenly acelerate to speed and the plane goes chrrrrrrrowwwwwWWWWW...and then you're in the air and it's time for one of my favourite things ever - in flight entertainment! Sometimes I don't want to leave when the plane lands. I should really try to get some sleep and not watch films all night.

Where was I? Yes, South America. It's nearly all over. Emotional. Lots of ups, a few downs, pretty much always interesting. Apart from 30-hour bus rides. They are less interesting. But the trip has been very nice. I've learnt a few things. What, I cannot say at the moment. Time and perspective is needed, to analyse, absorb and process these experiences. Yes, it's all about absorbtion.

So my next entry should be from Sydney. I've only a week as I can't afford to do a whole trip there and never planned on travelling there as part of this trip. Sfter that it's South Africa again, baby! I hope Mandela doesn't die before I get there else it'll be REALLY depressing.

Yo M8 just done sum serious blog readin-wow all sounds amazin. yh sydney is expensive but so worth it. All ur photos are cool, im lovin the long hair-lol!!!!! Have a wicked time in SA. Keep us posted. Take care lv bex xx